The Army Chief also listed the importance of biological chemical weapons and the threat that comes with it. 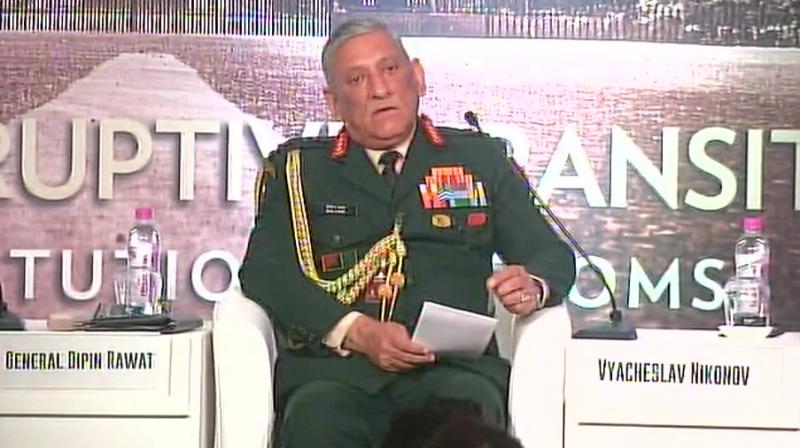 New Delhi: Army Chief General Bipin Rawat, on Wednesday, said that it was important to put checks and curbs on the internet and social media to counter terrorism.

“I understand that in a democratic country people might have issues when we put curbs in place. But it is important to restrict the use of social media to tackle terrorism,” the Army Chief said in his address at the Raisina Dialogue in the national capital.

“Terrorists are using systems which are highly technology enabled and transcending international borders. We need to disrupt terrorists and their sponsors. Need to identify nations who are sponsors,” General Rawat added.

The Army Chief also said the threat of nuclear and chemical weapons falling into the hands of terrorists could spell disaster for humanity.

“Terrorists are using systems which are highly technology enabled and transcending international borders. We need to disrupt terrorists and their sponsors. We need to identify nations who are sponsors.” the Army Chief said.

The Army Chief further said terrorism had two sides to it - militant and political.

“It is important to tackle both. Many may argue that there is no point in banning political outfits since they don’t indulge in terror activities directly, but we should not forget that they support it,” he added.

Commenting on ways to counter terrorism, General Rawat said it was imperative to identify who terrorists were and which are the nations that support terrorism.

“Anyone who uses violence as a means to an end is a terrorist. We need to identify the nations that have a state-sponsored policy to support terrorism,” he said. Once they are identified, General Rawat added, “The nations had to do their own job. While there should be international support, the nation still needs to work on countering its own terrorists.”

The Army chief also said it was important to identify where the terrorists get funds from. General Rawat added that one must “look at where poppy and cannabis grows”.

The Army Chief also listed the importance of biological chemical weapons and the threat that comes with it.

“Terrorism is here to stay. Unless all countries come together. Terrorism cannot be the new warfare. It has been seen that those nations that support terrorism often become victims of it eventually. So if you want a safe home, then we need to work towards ending it,” General Rawat said.

On Kashmir, General Rawat claimed that the people have realised that what they desired for cannot be achieved. “People of Kashmir in general are getting tired of terrorism. It has not given them what they desired for. You cannot cede away from India. People have realised that. Some have got radicalised… I feel most of them want to join the mainstream,”

The Army Chief added that the deradicalisation campaign needs to continue. “If that continues, we will soon be able to put an end to terrorism in Kashmir.”

Speaking at the event Haqqani said: “Good terrorist or bad terrorist basically means when you actually allow somebody who is continuously engaged in terror and its not to secure end of their activity but to justify it you say this is a good terrorist, that is where terminology comes in.”