Repos launches mobile pumps
India   All India  17 Jan 2017  Differences are natural but must respect each other's concerns: Modi on China
India, All India

Differences are natural but must respect each other's concerns: Modi on China

Speaking at the inauguration of the second Raisina Dialogue, Modi also slammed Pakistan for failing to reciprocate his overtures of peace. 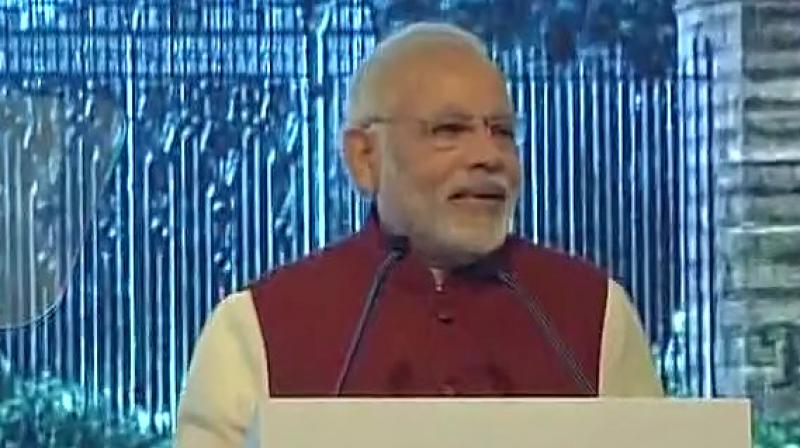 New Delhi: India alone cannot walk the path of peace with Pakistan and the neighbouring country must walk away from terrorism if it wants bilateral dialogue to resume, Prime Minister Narendra Modi said on Tuesday, amid continued chill in Indo-Pak ties.

Referring to ties with China, the Prime Minister said it was not unnatural for two large neighbouring powers to have some differences but both sides should show sensitivity and respect for each other's core concerns and interests.

He was speaking at the inaugural session of the three-day-long Raisina Dialogue, India's flagship geo-political conference which is being attended by top foreign and security experts from across the world.

On ties with Pakistan, Modi said the path of peace has to be Pakistan's journey as well and that India's stand in delinking terrorism from religion, and rejecting artificial distinction between good and bad terrorism, are now a global talking point.

"My vision for our neighbourhood puts premium on peaceful and harmonious ties with entire South Asia. That vision had led me to invite leaders of all SAARC nations, including Pakistan, for my swearing in.

"For this vision, I had also travelled to Lahore. But, India alone cannot walk the path of peace. It also has to be Pakistan's journey to make. Pakistan must walk away from terror if it wants to walk towards dialogue with India," he said.

In a veiled reference to Pakistan, he said those "in our neighbourhood who support violence, perpetrate hatred, and export terror stand isolated and ignored."

In his address, Modi gave a run down of India's foreign policy priorities, security interests in the Indian Ocean and bilateral engagement with neighbouring countries, Gulf nations and major powers including the US, China and Russia.

On Sino-India ties, he said both the countries have an unprecedented economic opportunities and that they can compliment each other in their march forward.

"I see the rise of India & China as an unprecedented economic opportunity for our two countries, and for the whole world. At the same time, it is not unnatural for two large neighbouring powers to have some differences.

"In the management of our relationship, and for the peace and progress in the region, both our countries need to show sensitivity and respect for each other's core concerns and interests," he said.

Referring to India's ties with the US, he said a certain amount of speed, substance and strength to the entire spectrum of economic, commercial and security engagements has been brought to the relationship through sustained engagement.

"Over the past two-and-half years, we have given a strong momentum to our engagement with US, Russia, Japan and other major global powers," he said, delving on India's external engagement and geo-strategic interests.

Talking about ties with the US, Modi also referred to his conversation with President-elect Donald Trump and said "we agreed to keep building on these gains in our strategic partnership."

"And, non-state actors are significant contributors to thespread of such challenges. Institutions and architectures built for a different world, by a different world, seem outdated. Posing a barrier to effective multilateralism," he said.

The Prime Minister said India's maritime interests are strategic and significant and that the primary responsibility for peace, prosperity and security in the Indian Ocean rests with those who live in the region.

"Ours is not an exclusive approach. And, we aim to bring countries together on the basis of respect for international law. We believe that respecting Freedom of Navigation and adhering to international norms is essential for peace and economic growth in the larger and inter-linked marine geography of the Indo-Pacific," he said without naming any country.

Delving on geo-political developments, he said the sharpest trajectory of change is happening in Asia but at the same time added that rising ambition and festering rivalries are generating visible stress points.

"The steady increase in military power, resources and wealth in the Asia-Pacific has raised the stakes for its security. Therefore, the security architecture in the region must be open, transparent, balanced and inclusive," he said.

Modi said his government has redefined, in a short span of time, and "despite uncertainty and conflict", partnerships with Gulf and West Asia, including Saudi Arabia, UAE, Qatar and Iran.

"We have not just focused on altering the angles of perception. We have also changed the reality of our ties. This has helped us protect and promote our security interests, nurture strong economic and energy ties and advance the material and social welfare of around 8 million Indians," he said.

The Prime Minister said India was pursuing its transformation in "unsettled times" and talked about sluggish growth and economic volatility.

"For multiple reasons and at multiple levels, the world is going through profound changes. Globally connected societies, digital opportunities, technology shifts, knowledge boom and innovation are leading the march of humanity.

"But, sluggish growth and economic volatility are also a sobering fact. Physical borders may be less relevant in this age of bits and bytes. But, walls within nations, a sentiment against trade and migration, and rising parochial and protectionist attitudes across the globe are also a stark statistic," he said.