Earlier, SP chief Mulayam Singh Yadav had presented a list of 38 names to son Akhilesh Yadav, which did not include Shivpal. 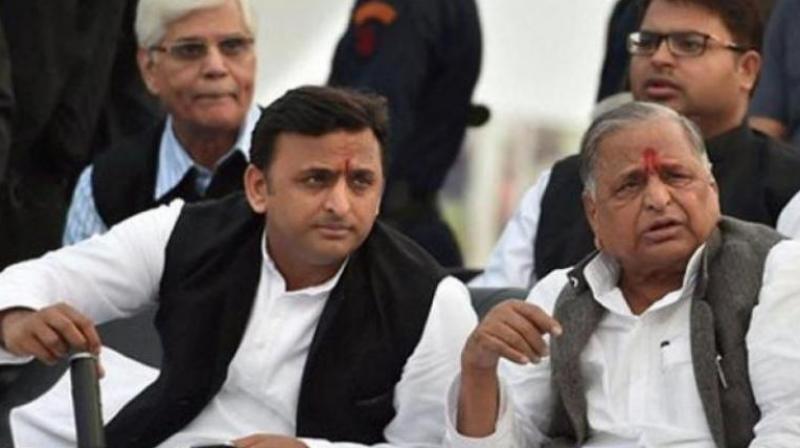 Lucknow: Uttar Pradesh Chief Minister Akhilesh Yadav, whose faction in the Samajwadi Party (SP) on Monday won the right to use the ‘cycle’ symbol for the state elections, met his father Mulayam Singh Yadav in Lucknow.

According to reports, Akhilesh met his father twice in the last 12 hours following the Election Commission (EC) verdict, and the search for a compromise is still on.

While the UP CM said that he ‘sought Netaji’s blessing’ after the EC ruled in his favour, reports said that there were discussions between the two regarding the candidate list for the UP elections.

Mulayam Singh Yadav is said to have presented 38 names to his son, which he said cannot be overlooked. Significantly, Mulayam cousin and confidante Shivpal Yadav’s name was absent from this list.

However, later in the evening, Mulayam reversed his position and demanded that Shivpal be included in the list.

However, his son, Aditya Yadav, who is in his mid-20s, is present, along with several ministers seen as Mulayam loyalists and disliked by Akhilesh Yadav.

In December, Mulayam Singh Yadav, still in charge of the party in and its symbol, had declared his own list for the February polls. This list excluded many leaders close to Akhilesh, which prompted the UP CM to release his own list of candidates the next day.

In the weeks that followed, father and son fought a bitter battle at the EC to claim the right to use the SP symbol. Akhilesh won this battle on Monday evening, with the electoral body announcing that it had granted him the symbol as he had 205 out of 229 SP MLAs on his side. The EC also stated that Akhilesh’s faction was the real Samajwadi Party, leaving Mulayam out in the cold.

If fresh talks fail, however, the SP patriarch has another option – a regional party, the Lok Dal, has offered him their election symbol to use.

Meanwhile, Mulayam's estranged cousin Ramgopal Yadav filed a caveat in the Supreme Court on Tuesday, stating that the court should not pass any order on the matter without hearing the Akhilesh Yadav faction.