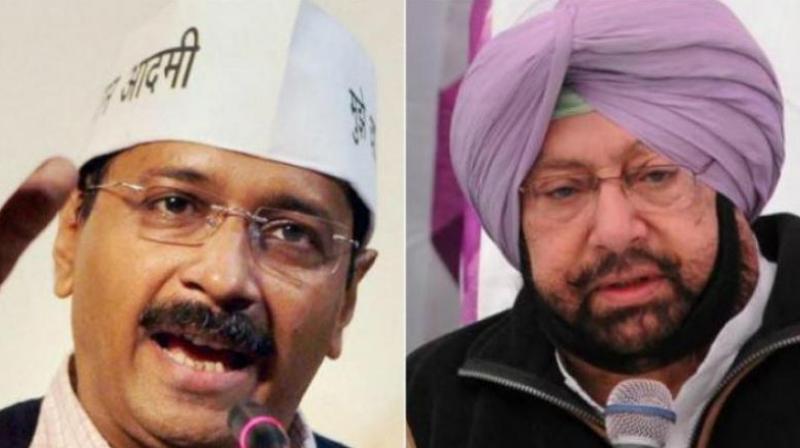 Patiala: Punjab Congress chief Amarinder Singh on Tuesday trashed AAP convenor Arvind Kejriwal's charge that he was fighting from Parkash Singh Badal's home turf of Lambi to help the Punjab Chief Minister win, and challenged him to enter the electoral contest in the constituency.

He also ruled out an alliance with any party, even as he said that the Congress President would decide on the chief ministerial face for the Assembly polls and no "deal" has been struck with new entrant Navjot Singh Sidhu.

"Congress will win the elections on its own. We will get clear majority," he told reporters in Patiala.

He said his decision to contest from Lambi "was motivated by his desire to save the people of Punjab from the Badals".

He described Lambi as his 'karambhoomi' from where he would "teach" the Badal family a "lesson for the savagery and atrocities" they had allegedly unleashed on the people of Punjab over the past 10 years.

Dismissing Kejriwal's charge as ludicrous, Amarinder said, "First he said I should fight Badal and now he says I'm helping the chief minister by contesting against him."

He also challenged the Delhi CM to take on Badal from Lambi. "Kejriwal will know his position and where he stands," he said.

Asked if Sidhu would be offered an important post if the party wins the assembly polls, Amarinder said "There is no deal with Navjot Sidhu, Congress doesn't do deals with anybody."

"He has never said anything like that (there has been no talk in this regard with Sidhu)," he added.

Asked if he would be the CM candidate, Amarinder said, "I don't know, that is Congress President's decision."

"The entire campaign is being handled by me and then you are asking me this question," he added in a lighter vein.

Sidhu's role, and his own, would be decided by the Congress high command, said Amarinder, adding that he and the cricketer-turned-politician would be campaigning for the party through a joint road show in Amritsar on January 19.

He reiterated that Sidhu would be a star campaigner for the Congress in the Punjab polls.

In response to a question, Amarinder said that he could not be present in New Delhi for Sidhu's joining of the Congress as he was busy campaigning in Punjab.

He cited his strong Patiala connection with Sidhu, whom he said he had known since he was a kid, to make it clear that there was no tension between him and the ex-cricketer, who had joined the Congress unconditionally.

Amarinder also said the former BJP MP himself had stated that he was a "born Congressman".

"I know Sidhu's family for a very long time. I have been watching Navjot Sidhu since his youth when he used to play cricket at Patiala. He has himself described his joining the Congress as his Ghar Vapsi," he said.