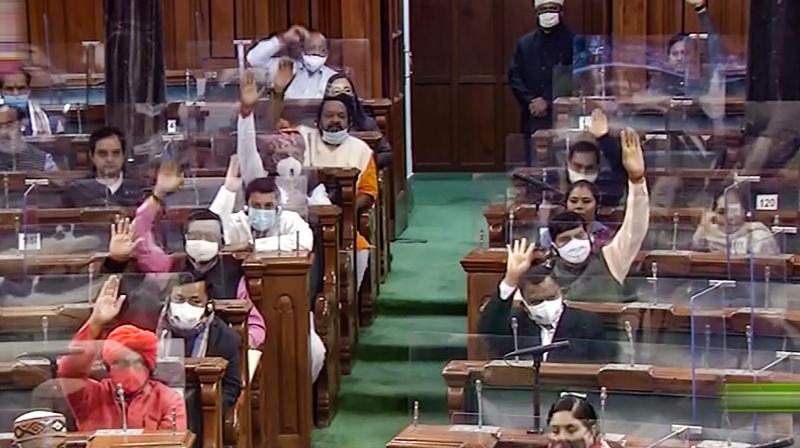 Parliamentarians in the Lok Sabha during the Winter Session of Parliament, in New Delhi, Wednesday, Dec. 15, 2021. (LSTV/PTI Photo)

New Delhi: The Lok Sabha session on Wednesday was a complete washout with the Opposition parties holding vociferous protests demanding that Union minister of state for home Ajay Mishra be dismissed after the Special Investigation Team report termed the killing of four farmers and a journalist in Lakhimpur Kheri as a “pre-planned conspiracy”.

The Lok Sabha was due to hold a discussion on the crucial issue of price rise on Wednesday at a time when wholesale inflation has touched a 12-year high in November at a whopping 14.23 per cent hitting the common man hard who is already reeling under the impact of Covid-19.

Unlike the Rajya Sabha, which has been rocked over the suspension of 12 Opposition MPs, the Lok Sabha’s proceedings have mostly been smooth through most of December. Congress leader Rahul Gandhi, who had given an adjournment motion notice in the House over the Lakhimpur Kheri incident, told reporters that the government was not allowing the Opposition to speak, and so the House was being disrupted. “We have said a judgment has come and that a minister is involved, a discussion be allowed. But they don’t want to discuss,” said Mr Gandhi. “It has been said that it (Lakhimpur Kheri incident) is a conspiracy. It obviously is. Everyone knows whose son is involved, we want the minister (MoS home Ajay Mishra) to resign. We want a discussion in Parliament, but the PM refuses. They are making excuses,” he said.

As soon as the Lok Sabha met in the morning, the Opposition members, including those from the Congress, DMK and some Left parties, sought to raise the issue. Later, they began shouting slogans, displaying placards and several members trooped into the Well. They were holding placards which read “Sack farmers killer” and “Modi sack Teni”.

The members did not yield to the repeated pleas of Speaker Om Birla that the issue could be raised after Question Hour, and the vociferous protests continued.

“My effort is always to conduct Question Hour so that the good tradition continues and important questions are taken up... I always give adequate time to members to raise issues... You (protesting MPs) are disrupting Question Hour. It is not a good tradition and does not give respect to the House. You don’t want to have a discussion,” Mr Birla said. After this, he adjourned the House till 2 pm. However, when the House again met in the afternoon, the Opposition members began their protests. After this, within about 10 minutes, the Lok Sabha was adjourned for the day.