Independent India was destined for many wars. Independence itself was closely followed by the first India-Pakistan war of 1947-48. 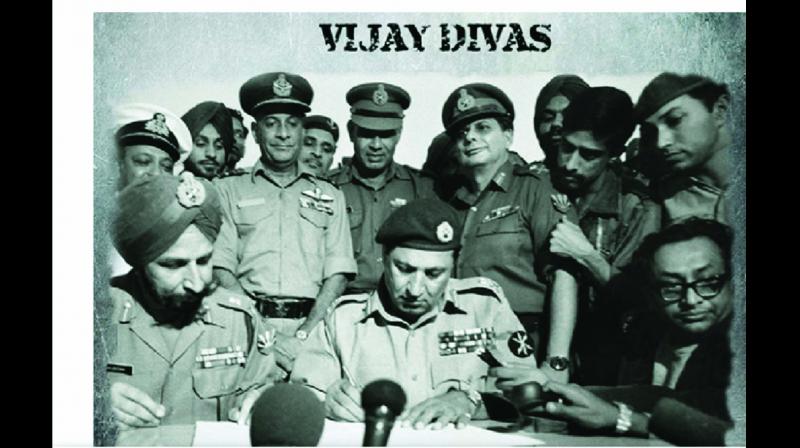 A file photo of Lt. Gen. A.A.K. Niazi, commander of all Pakistani forces in the eastern theatre, signing the instrument of surrender, as Lt. Gen. Jagjit Singh Aurora, GOC-in-C of India's Eastern Command and commander of the joint India-Bangladesh forces, looks on at the Ramna Race Course in Dhaka on December 16, 1971. Seated on extreme right is All India Radio's Surajit Sen, who was the first foreign correspondent to reach Dhaka.

On December 16, 2019, for the first time, Vijay Divas (Victory Day) will be celebrated at the Rashtriya Samar Smaarak, India’s National War Memorial. On February 25, 2019, Prime Minister Narendra Modi inaugurated the Rashtriya Samar Smaarak, dedicated to every soldier martyred while fighting for India in 72 years of Independence. The third-names of 25,942 fatal battle casualties have been inscribed on 16 walls of the memorial.

The third India-Pakistan war which began on December 3, 1971, ended 13 days later, on December 15, after the Pakistani forces in erstwhile East Pakistan were completely surrounded and defeated by the Indian Army, assisted by the Mukti Vahini (literally translated as freedom force). On December 16, 1971, Lt. Gen. Amir Abdullah Khan Niazi, heading 93,000 Pakistani troops, surrendered to the Indian Army under the command of Lt. Gen. Jagjit Singh Aurora at the Ramna Race Course, now Suhrawardy Udyan, in Dhaka, and East Pakistan was declared as the newly liberated “Bangladesh”. Since then, December 16 was instituted as Vijay Divas (Victory Day) and observed across India by paying tributes to the martyrs who laid down their lives for the nation. In the nation’s capital, New Delhi, the Indian minister of defence and Chiefs of the Army, Navy and Air Force pay homage at Amar Jawan Jyoti (eternal flame to the unknown soldier) at India Gate, the war memorial built by the British to honour Indian soldiers in World War I.

The famous and majestic India Gate was built by the British as a memorial to 74,187 Indian soldiers who were killed in various battles of World War I (WW I) and as many of their names as possible are etched on all the walls of this memorial. The other WW I war memorial is Teen Murti (pronounced moortee), literally meaning three statues, dedicated to the Indian Cavalry for its valiant role and incidentally, its last one as horsed cavalry — by World War II (WW II) horsed cavalry had become mechanised. While about 1.5 million Indian soldiers participated in WW I (1914-18) and in WW II (1939-45), 2.5 million Indian armed forces personnel took part and over 87,000 of them were killed. Field Marshal Sir Claude Auchinleck, Commander-in-Chief of the Indian Army from 1942, asserted the British “couldn’t have come through both wars (WWs I and II) if they hadn’t had the Indian Army.” This may have meant a war memorial even larger than India Gate, but following a mutiny by some Indian Navy sailors shortly after WW II, th
e British felt compelled to leave India in a hurry. So, a memorial to the sacrifices of Indians in WW II never got built.

Independent India was destined for many wars. Independence itself was closely followed by the first India-Pakistan war of 1947-48. Then came the Sino-Indian War in 1962, the second and third India-Pakistan wars in 1965 and 1971, many insurgencies and conflicts overseas in which the Indian armed forces have participated widely as part of United Nations’ missions and since the late 1980s. The fourth India-Pakistan war, which began at Jammu and Kashmir in the late 1980s, continues till date. However, till 2014, the Indian government under the Congress Party for 56 of 67 years never made any move towards building a national war memorial. Sometime after it assumed charge in 2014, the BJP announced its plan of making a national war memorial.

Leave alone not instituting a war memorial and often stonewalling whenever the matter came up, after the surgical strikes against Pakistani terrorists in 2016, ironically, some senior Congress leaders and the Congress leaning bandwagon of leftists/pseudo-intellectuals/pseudo secularists/human rights activists politicised and even ridiculed patriotism and national pride. Some of these Congress leaders even questioned the authenticity of the surgical strikes and also criticised the Army’s actions in the Kashmir Valley.

Anyway, having announced its plan, the BJP got going. The National War Memorial and Museum was designated as a special project, and the task of its timely execution was allocated to a special projects division under the chief administrative officer, ministry of defence and the military engineer services.

A global design competition was conducted, the result of which was announced in early April 2017. A Chennai architectural firm, WeBe Design Lab’s proposal was declared the winner and was accordingly chosen for the conceptualisation of the architectural design and for coordinating the construction of the project. The chief architect of the National War Memorial, Yogesh Chandrahasan of WeBe Design Lab, who designed the project, said: “The whole concept is based on the thought that the war memorial should be a place where we don’t mourn the death, but celebrate the life of the soldiers and pay respect to the sacrifices made by them.”

The Param Yodha Sthal, where the busts of 21 recipients of the Param Vir Chakra, India’s highest gallantry award during war, have been placed, is located in a large section of what was the quadrant between Kasturba Gandhi Marg and the main entrance of Major Dhyan Chand Stadium.

The memorial is open to the public free of cost, from 9 am to 6.30 pm (November to March) and from 9 am to 7.30 pm (April to October). For the first time since Independence, the Indian public and foreign tourists are able to get a glimpse of India’s history of wars and war heroes. The daily footfall on weekdays is 4,000 to 6,000 and on weekends and holidays it goes up to 10,000 or more.

Since its inauguration, every evening, five minutes before sounding the Retreat, a next of kin of kin of a battle casualty lays a wreath at the memorial as a tribute, witnessed by hundreds of spectators.

There is a National War Memorial App for more detailed information on the memorial and there is a souvenir shop in the memorial complex called Smarika, where memorabilia and war heroes’ stories in illustrated comics are available.