India   All India  16 Dec 2019  Have been assaulted by Rabri Devi, dragged out house: Daughter-in-law Aishwarya Rai
India, All India

Have been assaulted by Rabri Devi, dragged out house: Daughter-in-law Aishwarya Rai

The drama unfolded in evening when Roy — married to Tej Pratap Yadav – sat weeping outside the family's 10, Circular Road residence. 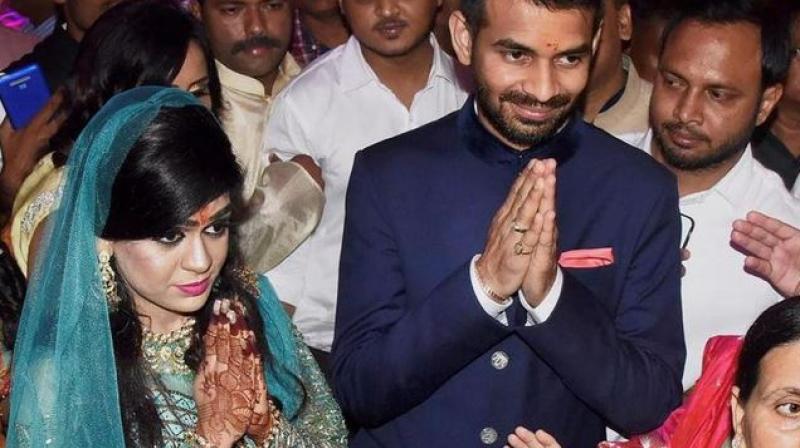 'I could simply not accept my parents being dragged into all this," Aishwarya Roy told reporters. (Photo: PTI)

Patna: Aishwarya Roy, the estranged daughter-in-law of RJD chief Lalu Prasad, on Sunday charged her mother-in-law and former Bihar Chief Minister Rabri Devi with beating her, dragging her by her hair and snatching away her mobile phone and other belongings before driving her out of the residence.

The drama unfolded late in the evening when Roy — married to Tej Pratap Yadav, the elder son of Lalu Prasad – sat weeping outside the family's 10, Circular Road residence.

Her father and RJD MLA Chandrika Roy, mother Purnima Roy and younger siblings – who live a few hundred metres away - rushed to the spot on learning about the incident. "I was watching TV inside my room upstairs when I got a message on my mobile phone that Tej Pratap Yadav's supporters have pasted posters across the Patna University campus, saying objectionable things about me and my parents. I came downstairs and protested before my mother-in-law that while tarnishing my reputation in public was abominable, I could simply not accept my parents being dragged into all this," Aishwarya Roy told reporters.

"She flew into a rage and began abusing me and, along with her female security guard, assaulted me physically. I was hit in my head, knees and feet, dragged by my hair and not allowed to put on my sandals and a shawl for warmth before being shoved out of the bungalow," she alleged.

"They have also snatched away my mobile phone as I had shot video footage of their misbehaviour. They must be keeping it in their possession to erase evidence of their wrongdoing”, she added.

Yadav and Roy had tied the knot in May, 2018 and the former had filed a divorce petition six months later. Her parents, while trying to console their daughter, said furiously “the entire family deserves to be in jail. We earlier thought that only our son-in-law was deviant and that he would be brought back on track by family members. But now it turns out that they are all together in the atrocities against our daughter”.

“Just look at the clammy weather out here. The last time our daughter was similarly driven out was a day of heavy downpour which had left the city inundated. It seems they derive pleasure from meting out such inhuman treatment to our child”, they added. In September, Roy was similarly spotted outside her residence, complaining about misbehavior at the hands of her in-laws. After a high drama that lasted for several hours, she had finally re-entered the house late in the night. Chandrika Roy, however, insisted that this time things had reached a point of no return and that the police have been called for lodging an FIR against Rabri Devi.

“We are now going to make no attempts at rapprochement nor are we going to accept any attempts for reconciliation from their side. We have made all attempts to salvage our child's marriage but it has been of no avail”, Roy lamented. Mahila Thana SHO Arti Kumari Jaiswal arrived at the spot and told reporters “the girl seems to be in a state of shock and hence we are taking her along to the police station and wait for the time till she is able to record her statement coherently. An FIR will be lodged based on her testimony and investigations and further action will follow”.

Shortly afterwards, scores of young men claiming to be supporters of Tej Pratap Yadav staged a demonstration in front of the residence of Chandrika Roy whom they accused of using his daughter to derive political mileage. They also alleged that Roy had approached Lalu Prasad with the marriage proposal for his own political gains and was frustrated upon not getting what he thought was his due.

A fuming Chandrika Roy told reporters who had gathered at his bungalow said, “I will show Lalu Prasad my aukaat (worth). He would not have been where he is but for my support. I will fight these people socially as well as politically”.

Roy is the sitting MLA from Parsa assembly segment that falls under Saran Lok Sabha seat – a pocket borough of Prasad, which is now held by the BJP. Roy's father Daroga Prasad Rai had served as the Chief Minister of Bihar for a brief period while the state was ruled by the Congress.