BJP Delhi chief Manoj Tiwari, in a tweet, said that an AAP MLA was “provoking” the public and called Delhi chief minister Arvind Kejriwal a “traitor”. 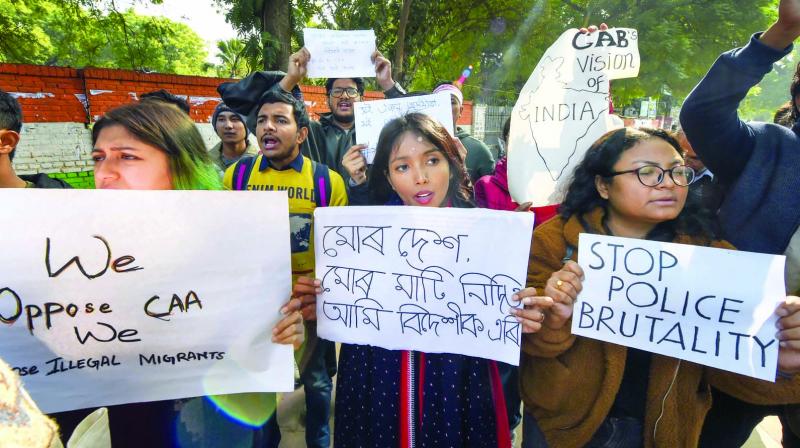 Students from the Northeast raise slogans during a protest against the Citizenship Amendment Act in New Delhi. (Photo: PTI)

New Delhi: The BJP on Sunday blamed the Aam Aadmi Party for the violence in south Delhi area during a protest against the amended Citizenship Act and demanded that it stop “provoking people”, but the AAP denied it.

BJP Delhi chief Manoj Tiwari, in a tweet, said that an AAP MLA was “provoking” the public and called Delhi chief minister Arvind Kejriwal a “traitor”. “An AAP MLA is provoking people at the behest of Arvind Kejriwal. The Muslims of the country are with India and are not going to be influenced by traitors like you. Stop provoking people. The people of Delhi will teach AAP traitors a lesson. The sin of AAP is being exposed,” he tweeted in Hindi.

Reacting to Mr Tiwari’s statements, deputy chief minister Manish Sisodia accused the BJP of getting police to set buses on fire during a protest in south Delhi as part of its “dirty politics”. Mr Sisodia also tweeted some photos from the protest site. There should be an impartial investigation into the violence that erupted during the protest against the amended Citizenship Act, the deputy chief minister said in a tweet in Hindi.

However, Okhla legislator Amanatullah Khan, who is apparently the MLA alluded to by Mr Tiwari, denied the accusations. “Some TV channels have run the news that protesters under my leadership have torched buses, which is wrong. I protested near Shaheen Bagh where nothing untoward happened,” he told reporters.

BJP leader Kapil Mishra likened the violence to the Godhra attacks. “This is a terrorist attack. Setting afire a bus which has a CNG cylinder means there was a conspiracy for a big blast. This fire was started by Amanatullah Khan. They are readying to repeat Godhra incident in Delhi,” he said.