Zoramthanga has inducted five cabinet ministers and six ministers of state, which also took the oath of office and secrecy. 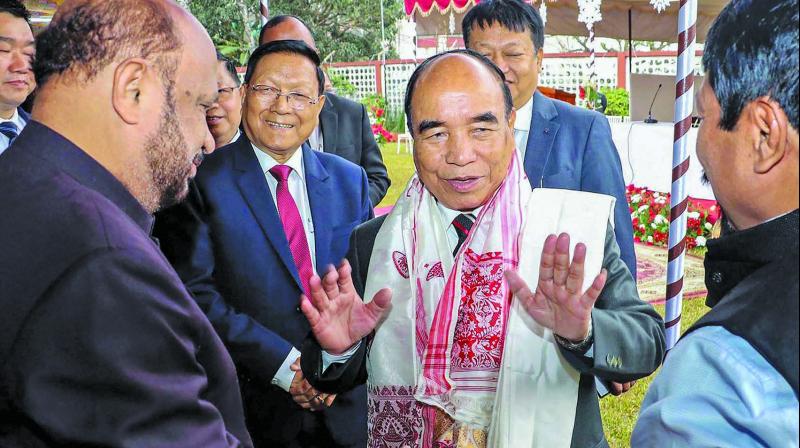 Guwahati: The Mizo National Front president Zoramthanga was sworn in as Mizoram chief minister with his 12-member council of ministers on Saturday at Aizawl.

The swearing ceremony, which held at Raj Bhawan, had some different look this time as the conventional and mandatory National Anthem was followed by “Bible reading and prayer”. This was for the first time when the swearing-in of a government took place amid reading of Biblical verses and singing of Handel’s famed ‘Hallelujah Chorus’ and other religious hymns. The chairman of the Mizoram Kohhran Hruaitute Committee (MKHC), a conglomerate of 16 major churches in the state Mr R Lalhmingthanga read out bible and offered prayers during the ceremony, which was attended by representatives of different regional political parties of Northeast.

Mr Zoramthanga was administered the oath of office and secrecy by Governor K Rajasekharan at a ceremony in the Raj Bhavan. He took the oath in Mizo language.

This is his third term as chief minister of the state. He led the Mizo National Front government in 1998 and 2003 also.

Mr Zoramthanga has inducted five cabinet ministers and six ministers of state, which also took the oath of office and secrecy. The senior cabinet minister Mr Tawnluia has been appointed as the deputy chief minister.

Mr Zoramthanga also maintained a safe distance from North East Democratic Alliance or National Democratic Alliance by not inviting leaders. The MNF announced that leaders from various other political parties would be invited on their individual capacity.

Earlier, Mr Zoramthanga had made it clear that he would not include the lone BJP legislator, Buddha Dhan Chakma, in his ministry despite MNF being BJP’s partner in NDA and the North East Democratic Alliance (Neda).

“MNF won majority on its own. So we will form our own council of ministers. We will not have any other party member in the ministry,” Mr Zoramthanga had said this soon after results were declared.

After swearing in Mr Zoramthanga told reporters that among his first priorities would be to implement complete prohibition on liquor across the state. The state’s influential groups – the church bodies and other pressure groups – have also been opposed to the sale of liquor in the state. Banning liquor was one of the main poll promises made by the MNF in the Christian-majority state. “We are committed to prohibit liquor across the state. There is no question of going back,” he added. Other things on his agenda include implementation of Social Economic Development Programme (SEDP), providing world-class education, health care to the people, proper implementation of civic issues and roads repair, he said.

Election to 40-member Mizoram Assembly was held on November 28 and counting of votes took place on December 11. The MNF won 26 seats in the 40-member Assembly, followed by the Zoram People’s Movement (ZPM) at eight and the Congress at five.