The Opposition members stormed into the well of the House demanding an apology from the Prime Minister over his remarks. 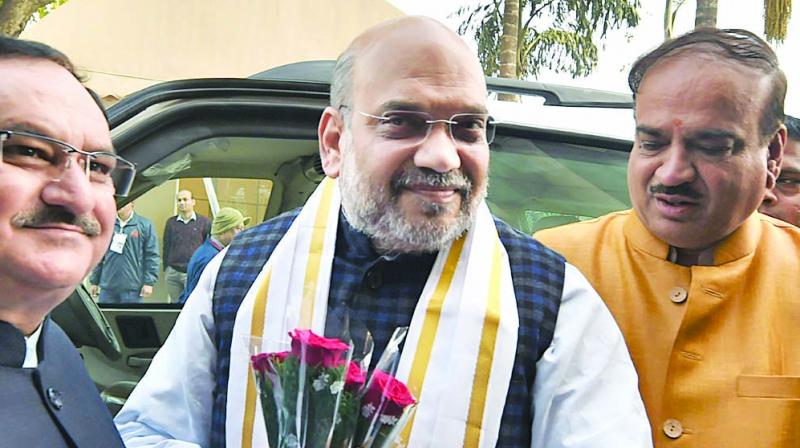 BJP president Amit Shah is welcomed by parliamentary affairs minister Ananth Kumar and health minister J.P. Nadda on his arrival at Parliament House on the opening day of the Winter Session. (Photo: AP)

New Delhi: The Winter Session began on a stormy note in Rajya Sabha on Friday with the Opposition repeatedly disrupting proceedings  and demanding an apology from Prime Minister Narendra Modi over his “conspiracy with Pakistan” remarks against his predecessor Dr Manmohan Singh, Congress members also gave a notice for discussion on the statement of the Prime Minister but it was disallowed by the Chair.

Speaking to reporters,  Leader of Opposition Ghulam Nabi Azad said, “We gave a notice, but the Chairman adjourned the House and did not let us raise the issue. We are disappointed. The chairman should have given us permission. This is a national... international issue.”

The Opposition members stormed into the well of the House demanding an apology from the Prime Minister over his remarks. The House had to be adjourned four times before being finally adjourned till Monday.

Mr Azad said that the Prime Minister was aware of the notice “but the Prime Minister and the dispensation are arrogant and confrontational. And this is most unfortunate. This attitude does not augur well for democracy. It is an ominous development on the first day itself.” CPI’s D. Raja said that it was “not correct” on Mr Modi’s part to cast aspersions on Dr Singh.

The CPI national secretary said that Mr Modi should have called up his predecessor if he had any information on the “conspiracy” issue.

“He should have done it, but the way he raised the issue in an election campaign... It is highly objectionable. It is not good for democracy,” Mr Raja said, asking the government to respect the Opposition.

At an election rally in Gujarat on Sunday, Mr. Modi had suggested that Pakistan was trying to influence the state Assembly polls. He had claimed that some Pakistani officials and Dr Singh met at Congress leader Mani Shankar Aiyar’s house over dinner on December 6.

Countering Opposition’s aggression on the opening day of the session, parliamentary affairs minister Ananth Kumar hit back saying, “The Congress should apologise over its leaders meeting Pakistan officials.”

Earlier, finance minister Arun Jaitley said that the Congress should tell the nation what transpired between its top leaders and Pakistani leaders over dinner at Mr Aiyar’s house.

Opposition members also protested the disqualification of rebel JD(U) leaders Sharad Yadav and Ali Anwar from the House by the Chairman, which was vociferously countered by ruling party MPs.

Later in the evening, an unfazed NDA decided to push the government’s agenda in Parliament despite the Opposition parties’ protests. A leader, who attended the NDA meeting, said that the Prime Minister spoke