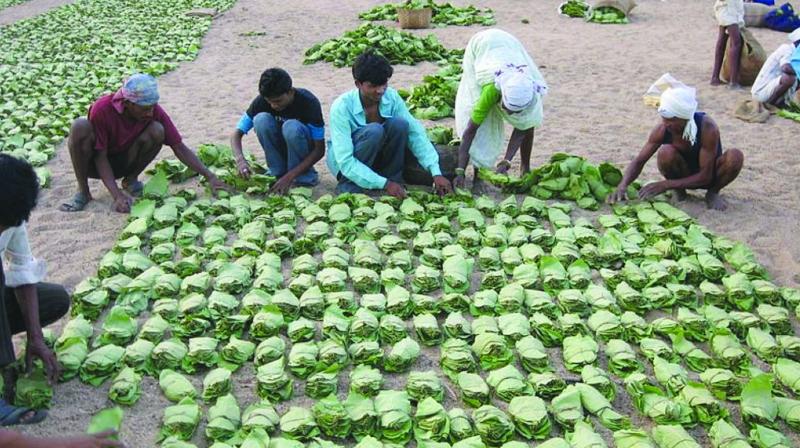 Bhubaneswar: After waging a battle against both the state and central governments for over a decade, over 1,000 poor kendu or bidi leaf pluckers of six gram sabha areas in Odisha's backward Kalahandi district have finally won the right sell their forest produce directly to buyers of their choice and earn higher price for their labour.

The deregulation of trade in  kendu leaf (also known as tendu leaf or green gold), a Non-Timber Minor Forest Produce (NTMFP) has come as a big relief for villagers, most of whom belong to the Gond and Kondh tribal communities. They are now expecting higher prices and a change in fortune in the coming days as the government procurement price was much below the price offered by private agents..

"It's a dream come true for us. Previously, we used to earn a maximum of Rs 100 a person after a day's hard labour. Now, our income is going to increase two hundred times," said Dillip Majhi, a kendu leaf plucker.

After the government agreed to give the pluckers the right to sell directly, the representatives of kendu leaf pluckers can now issue permits to prospective buyers to procure and transport the leaves from them directly without any government interference.

The new development, according to social scientists, will result in significant improvement in the economic standard of pluckers, mostly from backward dalits and tribal communities.

The fight to get the direct-sell right was not an easy one. The villagers, were initially given the impression that the deregulation of kendu leaf sale will lead to problems.

While the Kendu Leaf (KL) Organisation, the state government's own procurement agency, offered just 90 paisa for a bundle of 20 good quality leaves (a bundle is locally called keri), the private players offered Rs 2.50 for the same. Besides, immediate payment by the private players at the doorstep came as an extra encouragement for them.

A government order has now empowered the Gram Sabhas to issue permits to buyers for hassle-free transportation of kendu leaf to bidi factories located in distant places like Kolkata, Mumbai, Chennai and Hyderabad.

Prabhat Kumar Mishra, the programme manager of leading social organisation Regional Centre for Development Cooperation, who was spearheading the campaign for deregulation of kendu leaf is all praise for the Odisha and the Union governments for acceding to the demand of the local people.

“The financial state of pluckers will improve drastically under the new liberal regime,” said Mr Mishra.

Earlier, the pluckers were left angry when villagers very nearly lost an opportunity to earn Rs 15 lakh from an order place by a private procurer of kendu leaf. The company was threatened by the local government agencies not to procure leaf directly and directed to leave the state, said a trial.

In the letters, the tribals tried to convince the Union and state governments that under the Scheduled Tribes and Other Traditional Forest Dwellers (Recognition of Forest Rights) Act, 2006, they are entitled to collect and sell kendu leaf which comes under the NTFP category. And, preventing them from directly selling it to the procurer of their choice went against the spirit of law.

Sensing that the tribals might raise a banner of revolt if their demand is not met, the Odisha government through an order in November deregulated kendu leaf trade and allowed the villagers to procure, process, store and sell the leaf to private firms.

On November 22, Junagarh MLA Captain Mishra handed over the deregulation order to a gathering of one 1,000 tribals. and other-traditional forest dwellers (OTFD) and informed them about it.