India   All India  16 Nov 2019  Martyr’s family yet to get full compensation
India, All India

Martyr’s family yet to get full compensation

The promise of local politicians to build a ‘Shaheed Smarak’ (memorial) at Rawat’s funeral has become mired in a land dispute. 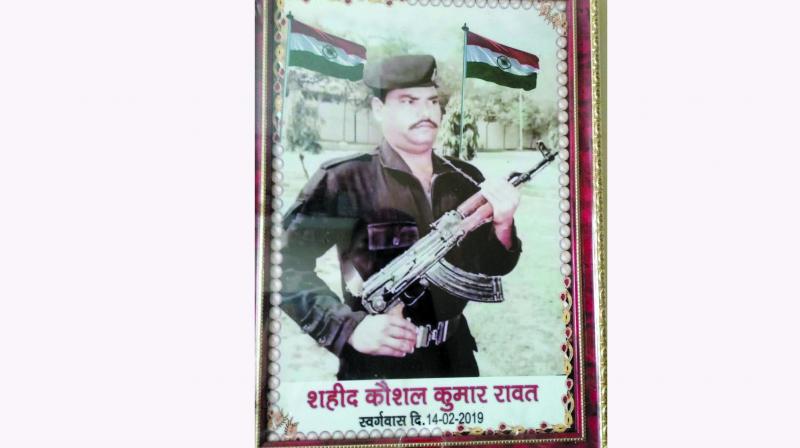 Constable Koushal Kumar Rawat was killed along with his fellow CRPF soldiers in Pulwama terror attack on February 14.

Bengaluru: The Pulwama terror attack of February 14 shocked the nation, which grieved as 40 soldiers of the Central Reserve Police Force (CRPF) were killed in the incident.

While there was an outpouring of support for their families, Constable Koushal Kumar Rawat’s family is being treated shabbily by the Uttar Pradesh government and is caught in a web of  red tape as it waits to be paid the full compensation promised.

Constable Rawat from Agra was killed along with his fellow CRPF soldiers in the suicide attack by a vehicle — bomber, who rammed into their convoy on the Jammu —        Srinagar national highway at Lethpora in Pulwama district.

While the UP government lost no time in giving his family Rs 25 lakh as compensation, it has still not given it another amount, which reportedly exceeds Rs 25 lakh, collected from the one-day salary deducted from the pay of the staff of various departments even  nine months after the tragedy.

And to the family’s dismay,  the promise of local politicians to build  a ‘Shaheed Smarak’ (memorial) at Rawat’s funeral has become mired  in a land dispute with some locals opposing its construction.

“We stay in Gurgaon and are being made to run from pillar to post in Agra for the compensation. We want to be treated with dignity. When my mother in an emotional outburst said that the administration of Agra was moving at a snail’s pace, the district magistrate was curt to her. My father has sacrificed his life for the nation and we are only asking what we deserve,” said Vikash Rawat, late constable’s son.

He revealed that althou-gh Rs 2.70 lakh was collected from the employees of Agra’s district development department, the demand draft for the amount was cancelled due to some error and was never made again.

The family is also upset at not being given the plot of land it was promised. The late constable’s wife, Mamta, had in September written to the defence ministry, requesting for it to build a memorial for her late husband, but has not heard from it so far.

“We just want land like every other martyr’s family has been given. The money deducted from the salaries has also not been sent to us. It has all been swallowed up by corruption,” said the late constable’s  daughter, Apurwa Rawat.

No one knows where the money has gone,”

The family is now pinning its hopes on on senior CRPF officials, who have promised to discuss the issue with the district magistrate on November 21.