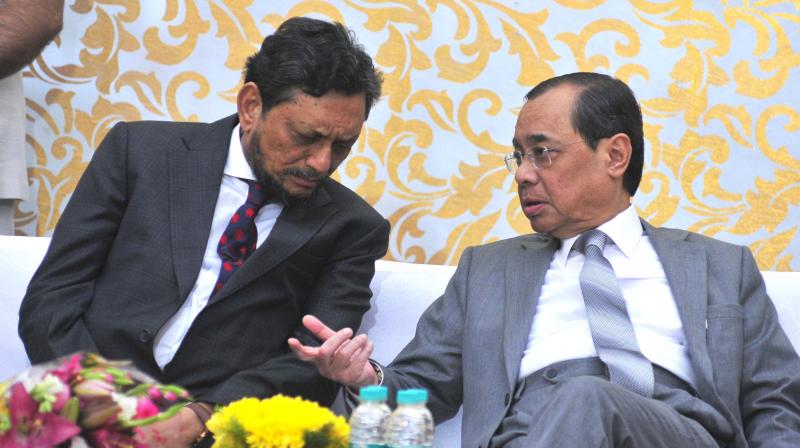 New Delhi: After being at the helms of the Supreme Court, a little over a year, the Chief Justice Ranjan Gogoi on his last working day on Friday said that he chose to belong to the institution whose strength lay in public confidence and trust.

In a statement issued today in response to requests from media persons for one to one interview , CJI Gogoi said, “ As a public functionary, entrusted with onerous constitutional duties to discharge, the idea of courting the press never endeared itself as a choice in the interest of my institution.”

“I chose to belong to an institution whose strength lay in public confidence and thrust, earned not through good press, but through our work as judges on  the bench”, said CJI Gogoi in his statement.

Appreciating the media for displaying “maturity and character” and exercising “exceptional discretion” to prevent “canard and falsehood” from clogging the news space, CJI Gogoi said, “To me, those were the times when the stellar role of journalists, as defenders of truth and democratic ideals came to the fore.”

Declining the request by the scribes for one to one interview, CJI Gogoi said, “It is not the requirement of our institution, for the judges to reach out to our citizenry through the press – rather such outreach out to be symbolic in extraordinary situation demanding an exception to norm.”

This seems to be an apparent reference to the press conference that four judges — Justice J. Chela-meswar, Justice Kurian Joseph, Justice Madan B. Lokur and Justice Ranjan Gogoi  had addressed on January 12, 2018.

Three judges have already retired and CJI Gogoi, though today was his last working day in the top court, would demit office on November 17.

However, CJI Gogoi said that it was not to suggest that that the press has no contribution to make to the growth of our institution. On the contrary, a good press is also a parameter, amongst others, that is known to be indicative of our institutional growth.

After spending a few minutes in the court room number one flanked on the left with Chief Justice designate Justice S.A.Bobde, CJI Gogoi  had a busy day and also went to Rajghat – which he had visited soon after being sworn in as CJI on October 3, 2018.

In the evening he had a farewell function organized by Supreme Court Bar Association but did not deliver any speech. However, later he spoke to High Court judges and judges of subordinate judiciary through video conferencing.

Though CJI Gogoi’s name is etched in the history for heading the bench that heard Ayodhya title suit case for 41days and pronounced the judgment, CJI Gogoi was instrumental for pushing the dithering government to appoint Lokpal – a matter which he had heard for a long duration. He is also credited for pronouncing the judgment restricting the government and its agencies putting up advertisements with the pictures of politicians.  He restricted it to the President, Prime Minister, Governor and Chief Ministers. However, later this list was expanded.

It was CJI Gogoi during his tenure as top court judge passed orders mandating lawmakers and ministers to vacate their official residences after they cease to be the lawmakers a  or minister.

However, he faced some flak for heading the bench along with Justice Rohinton Fali Nariman for the updating of National Citizens Register in Assam.

Defending the decision to update NRC, CJI Gogoi had on November 3, at a book release function said, “The NRC is neither new nor a novel idea. It found expression as early as in the year 1951 and in the particular context of Assam, in 1985 following the Assam Accord. Infact the current NRC is an attempt to update the 1951 NRC.”