Sabarimala Temple opens for devotees, 10 women sent back by police

Ahead of the opening of the temple, Kerala govt said they will not provide protection to any woman visiting the temple. 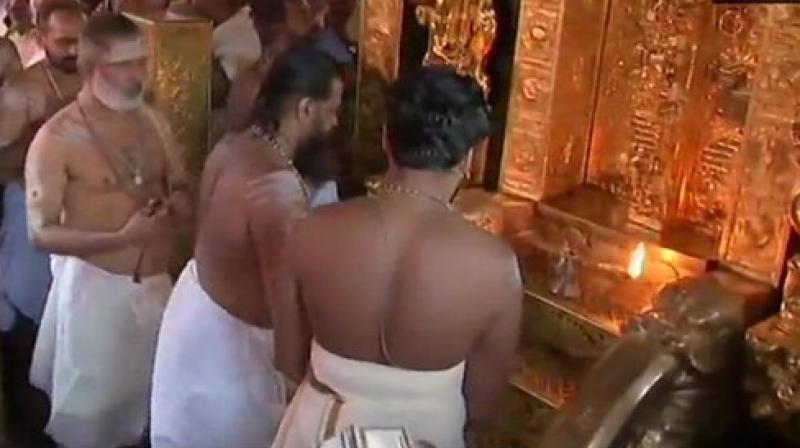 Amid confusion over the latest verdict of the Supreme Court and threats by some women activists to worship at hilltop temple, the Sabarimala will open on Saturday for three-month pilgrimage season. (Photo: ANI)

Pathanamthitta: Ten women returned from the Sabarimala on Saturday afternoon, as devotees started a trek to the hilltop temple hours before the shrine in Kerala opens for the 41-day annual pilgrimage season.

According to police sources, several women of menstruating age who came Andhra Pradesh to offer prayers at the shrine were sent back from Pamba.

Police personnel sought proof of age as some elderly women began the trek amid a heavy rush of devotees in the base camp of Pambha, which is 5 km away from the temple dedicated to Lord Ayyappa, reported Hindustan Times.

The chief priest or tantri of the Sabarimala temple, Mahesh Kandarau, will open its doors at 5 pm two days after the latest verdict of the Supreme Court and threats by some women activists to worship at hilltop temple.

Tight security arrangements have been made in Pathanamthitta district, the location of the shrine, a day before Sabarimala Temple opens for the Mandala Pooja festival.

Pathanamthitta District Collector PB Nooh said that all basic necessities such as toilets, water kiosks and medical emergency centres are in place.

"All basic arrangements are in place. We have deployed over 800 medical staff and established 16 medical emergency centres. Around 2,400 toilets and more than 250 water kiosks are ready. We have more than 1,000 sanitation workers deployed to ensure a clean atmosphere," he told reporters here.

The opening of the Sabarimala Temple comes a day after a five-judge bench of the Supreme Court had referred a clutch of petitions seeking review of its order which paved the way for the entry of women into Sabarimala temple in Kerala to a larger seven-judge bench by a majority 3:2 ruling.

The top court also observed that the right to worship by an individual cannot outweigh the rights of a religious group.

Women right activist Trupti Desai on Friday said that she will go to Sabarimala temple after November 20 regardless whether she would be provided protection by the Kerala government or not.

"I will go to Sabarimala after November 20. We will seek protection from the Kerala government and it is upto them to give us protection or not. Even if not provided with protection, I will visit Sabarimala for the darshan," said Desai.

Ahead of the opening of the temple, Kerala Devaswom Board Minister K Surendran on Friday said the state government will not provide protection to any woman visiting the temple and those who need protection should get an order from the Supreme Court.

He also asserted that activists like Trupti Desai should not see the shrine as a place to show their strength.

"The state government will not provide protection to any woman visiting Sabarimala temple. Activists like Trupti Desai should not see Sabarimala as a place to show their strength. If she needs police protection, she should get an order from the Supreme Court," he told reporters at a press conference in Thiruvananthapuram.

The review petitions challenged the authority of the apex court to intervene in the belief of the people. It argued that the temple deity is a "Brahmachari" (celibate) and "centuries-old beliefs" should not be disturbed by the entry of menstruating women worshippers.