India   All India  16 Nov 2018  ‘Trupti Desai an RSS activist’: Kerala minister on her plan to enter Sabarimala
India, All India

‘Trupti Desai an RSS activist’: Kerala minister on her plan to enter Sabarimala

Kerala minister also alleged that BJP is using Desai to further its political agenda in the state in name of Lord Ayyappa. 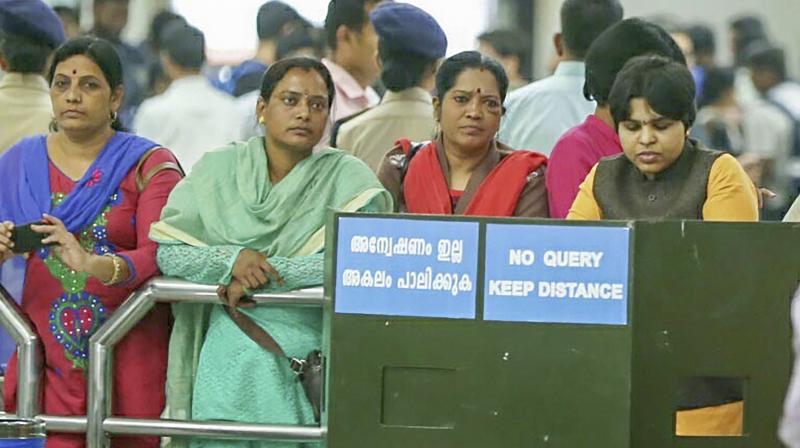 'I have no interest in politics, and I request the leader not to defame us. The RSS-BJP activists are protesting against us,' Trupti Desai said. (Photo: PTI)

Kochi: Kerala Agriculture Minister V S Sunil Kumar on Friday said women activist Trupti Desai who has been held up in Kochi International Airport since her arrival, is an RSS member.

The Kerala minister also alleged that the BJP is using Desai to further its political agenda in the state in the name of Lord Ayyappa.

"Trupti Desai is an RSS activist. Behind her plans to enter the (Sabarimala) temple, there is the thinking of RSS," VS Sunil Kumar told NDTV.

The CPI minister further said that the Rashtriya Swayamsewak Sangh and BJP were trying to exploit the situation to their benefit.

The Kerala minister said 99 per cent of those who have been protesting against the Sabarimala order are "not devotees" but "hard-core BJP-RSS workers."

The RSS and the BJP want to use "Lord Ayyappa" -- the deity of Sabarimala, the way they have used "Lord Ram" to further their political agenda in North India, NDTV reported V S Sunil as saying.

"Supreme Court has clearly said that there won't be a stay on their verdict at the moment. What can we do in that? We want to protect the devotees but RSS goons are creating a problem," news18.com quoted Sunil Kumar as saying.

He also asked that why Desai wasn’t stopped in her hometown Pune.

"She started from Pune. Why the RSS-BJP workers were not being able to stop her? Why are they trying to stop her at Kochi airport? Why is she being stopped in Kerala only? VS Sunil Kumar said.

The Supreme Court on September 28 lifted the centuries-old ban on entry of women of menstruating women into the hilltop shrine of Lord Ayyappa in Kerala.

When NDTV spoke to Desai, she said: "I have no interest in politics, and I request the leader not to defame us. The RSS-BJP activists are protesting against us."

Desai added that she has come to demand the right to equality. "If your government cannot ensure that, please at least don't insult us," she said.