The Sabarimala temple opened today at 5 pm for the third time after SC verdict that lifted ban on entry of women. 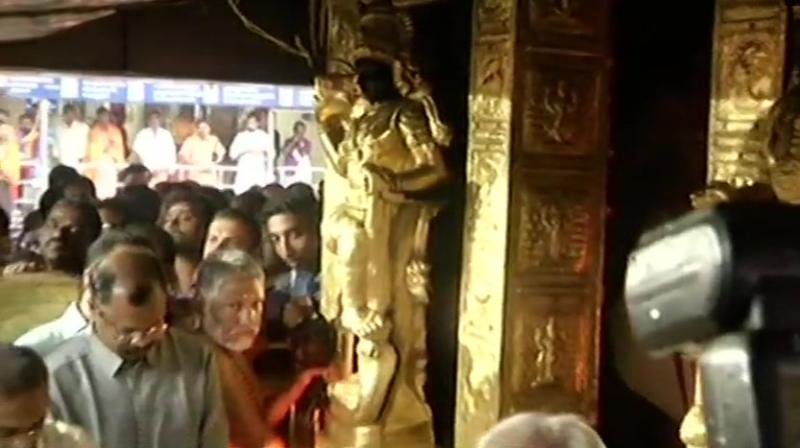 Temple priests said they will shut the temple if women between 10 and 50 enter the temple premises. (Photo: Twitter | ANI)

Kochi: Devotees on Friday evening thronged to Sabarimala temple as it opened its door for the 62-day long Mandala Pooja-Magaravilaku annual pilgrimage season.

On Friday morning, activist Trupti Desai who reached the Kochi International Airport faced stiff protests by local BJP activists who had congregated outside the airport along with several protesters.

Desai, accompanied by six of her colleagues, was unable to get out of the airport. Following a more than 12-hour wait, she said that she does not wish to cause violence and so would be heading back.

Desai had, earlier in the week, sent an email to the Kerala Chief Minister Pinarayi Vijayan seeking security during her travel to the hill shrine.

The Sabarimala temple opened around 5 pm today for the third time after the Supreme Court September 28 verdict that lifted the centuries-old ban on entry of women between the ages 10 to 50.

On Thursday, the Kerala Chief Minister held an all-party meeting on Sabarimala, aimed at discussing the row over the entry of women of menstruating ages at the Sabarimala temple, ahead of the two-month long annual 'Mandala Makkaravillakku' or the pilgrimage season, set to start on November 17.

After the nearly three-hour long meeting, dubbed as a ‘farce’ by the Opposition, Vijayan said his government was duty bound to enforce the apex court’s verdict  allowing women of all ages to pray at the hill temple of Lord Ayyappa as it had not been stayed.

Here are the updates from today's Sabarimala temple opening:

07:19 pm: "Protesters threatened taxi drivers from providing us services.Hotel staff was threatened of damage to hotels if rooms were given to us. It saddens me to see that people who call themselves Ayyappa devotees are abusing and threatening us", said Trupti Desai at Kochi airport.

Protestors threatened taxi drivers from providing us services.Hotel staff was threatened of damage to hotels if rooms were given to us. It saddens me to see that ppl who call themselves Ayyappa devotees are abusing&threatening us: Trupti Desai at Kochi airport. #SabarimalaTemple pic.twitter.com/Q9CZrJZsPc

06:29 pm: Activist Trupti Desai will return to her hometown Pune tonight, reported news agency ANI. She has been at the Kochi airport since morning as protesters did not allow her to proceed to the Sabarimala Temple.

#Kerala: Visuals of Trupti Desai from Kochi airport; she will return to her hometown Pune tonight after protesters did not allow her to proceed to #SabarimalaTemple. pic.twitter.com/EUHG3CIH9U

06:17 pm: Trupti Desai says police have asked her to return to Pune. The activist said she will announce her decision by 6:30 pm.

Desai, who reached Kochi airport at around 4:40 am, has been unable to come out of the airport in over 12 hours, with the protesters saying her group would not be allowed to proceed to the Sabarimala temple.

05:40 pm: Devotees throng to Sabarimala Temple. The temple will be open for the 62-day long Mandala Pooja-Magaravilaku annual pilgrimage season.

03:39 pm: "Trupti Desai should go back. She will have to step on our chests and walk over us if she wants to enter Sabarimala temple," said activist Rahul Easwar protesting outside Kochi airport.

12:40 pm: Trupti Desai and her associates have been held up inside the airport for over seven hours.

12:37 pm: No private vehicles will be allowed to Sabarimala only Kerala State Road Transport Corporation (KSRTC) buses will transport the pilgrims to Pamba.

12:35 pm: Heavy rains are lashing Sabarimala and nearby areas and devotees have not yet been allowed to leave for Pamba, a key base camp enroute to the temple, reports news agency PTI.

12:30 pm: IGP Vijay Saleem has asked police personnel to follow strict dress code at Sabarimala, while exemption has been given to cops at the holy 18 steps.

12:25 pm: Over 15,000 personnel, including women police personnel and 860 women civil police officers, would be deployed during the season, when lakhs of devotees from different parts of the country are expected to throng the shrine.

10:56 am: "Police tried to evacuate us from another gate but protesters were there as well. Protests being held here. Does this mean protesters are scared that we'll reach Sabarimala once we reach Nilakkal, or, are they trying to scare us? We won't return until we have 'darshan'," says Trupti Desai.

10:55 am: "We reached Cochin Airport at 4:30 am. Protests were being held outside. We booked taxi 2-3 times but drivers have been threatened that their vehicle will be vandalised if they offer us a drive. Police have said that we can't go outside now," Trupti Desai said.

09:55 am: Trupti Desai, founder of Bhumata Brigade, having breakfast at Cochin International Airport as she has not been able to leave the airport yet due to protests being carried out against her visit to Sabarimala temple. 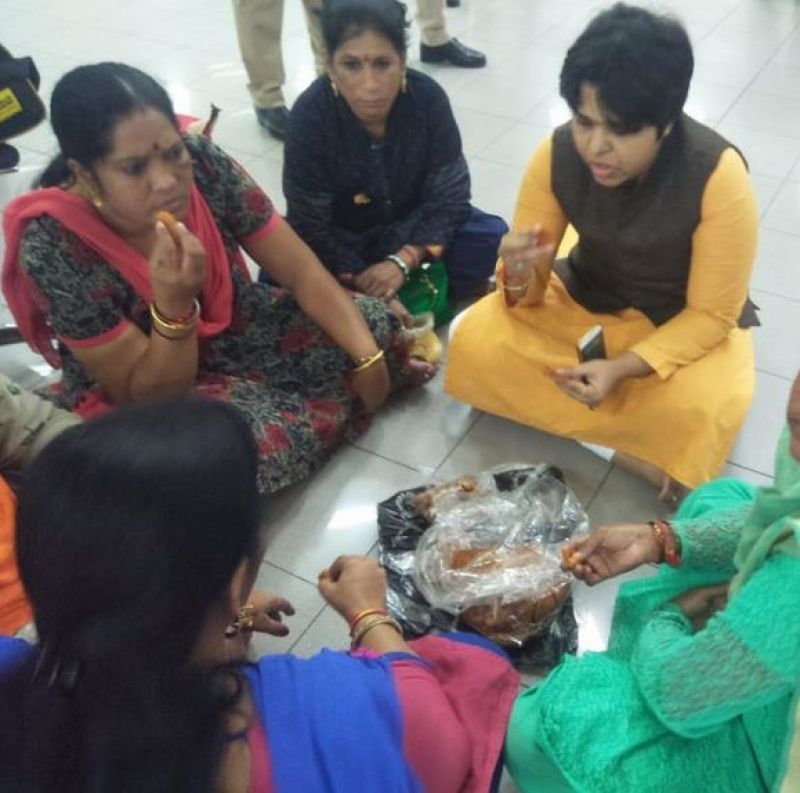 09:25 am: Temple priests said they will shut the temple if women between 10 and 50 enter the temple premises.

09:15 am: Section 144 imposed around the Sabarimala temple

09:10 am: To prevent women of menstruating age from entering the Lord Ayyappa shrine, protesters are gathering in large number outside the Kochi airport. They are also checking hotel rooms and vehicles.

Protesters are asking hotels not to accommodate women of the "banned" age group.

09:00 am: Police were deployed in large numbers at Kochi airport to control the situation. Police officers held discussions with Desai and protesters but both sides stick to their stand, reports news agency PTI.

08:55 am: Trupti Desai, founder of Bhumata Brigade, at Cochin International Airport. Protests are underway outside the airport against her visit to Sabarimala temple.

Kochi: Trupti Desai, founder of Bhumata Brigade, at Cochin International Airport. Protests are underway outside the airport against her visit to #SabarimalaTemple. #Kerala pic.twitter.com/T3y1JEj8ZH

08:10 am: "Protestors should not resort to violence. Once we reach there, we'll see what level of security state gives us. Even if the state doesn't give us any security, we'll still go, but I can be attacked. I have received so many threats of attack and killing," Trupti Desai said.

Protestors should not resort to violence. Once we reach there, we'll see what level of security state gives us. Even if the state doesn't give us any security, we'll still go, but I can be attacked. I have received so many threats of attack & killing: Trupti Desai. #Sabarimala pic.twitter.com/AAVKTqfuWg

08:08 am: Protesting local BJP leaders at the Kochi airport, alleged that Desai and her team came to violate the centuries-old custom of the temple that restricts entry of women between 10 and 50 years, reports news agency PTI.

08:05 am: "Won't allow Trupti Desai to go out from airport even if she being escorted with police vehicle or other government means. Airport taxies also won't take her. If she wants, she can use her own vehicle. There will be agitations all along her way even if she goes out from airport," MN Gopi, BJP, outside Cochin airport.

Won't allow Trupti Desai to go out from airport using police vehicle or other govt means.Airport taxies also won't take her.If she wants,she can use her own vehicle.There will be agitations all along her way even if she goes out from airport: MN Gopi, BJP, outside Cochin airport pic.twitter.com/sRoT0kZtUj

08:02 am: Protesters gather outside Cochin International Airport. Trupti Desai, the founder of Bhumata Brigade, has arrived at the airport from Pune. Security has been heightened. She had written to Kerala Chief Minister seeking security for her visit to the hilltop shrine of Lord Ayyappa on 17 November. 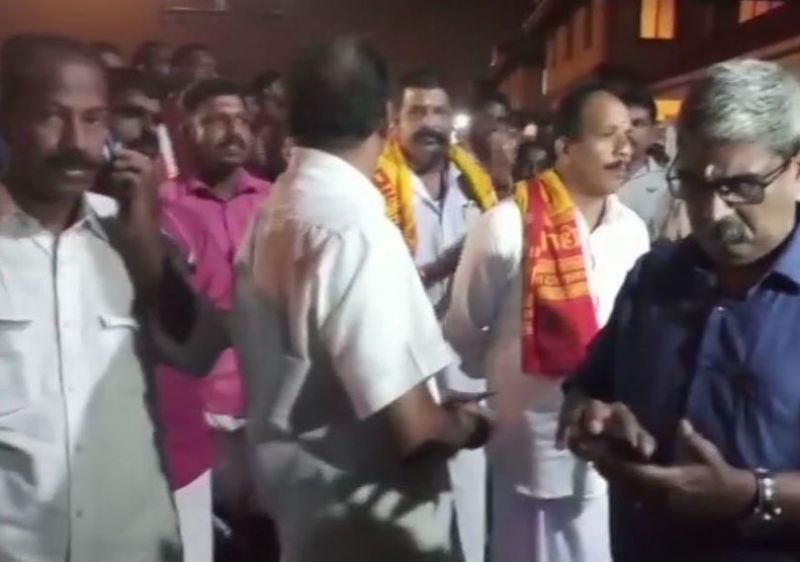 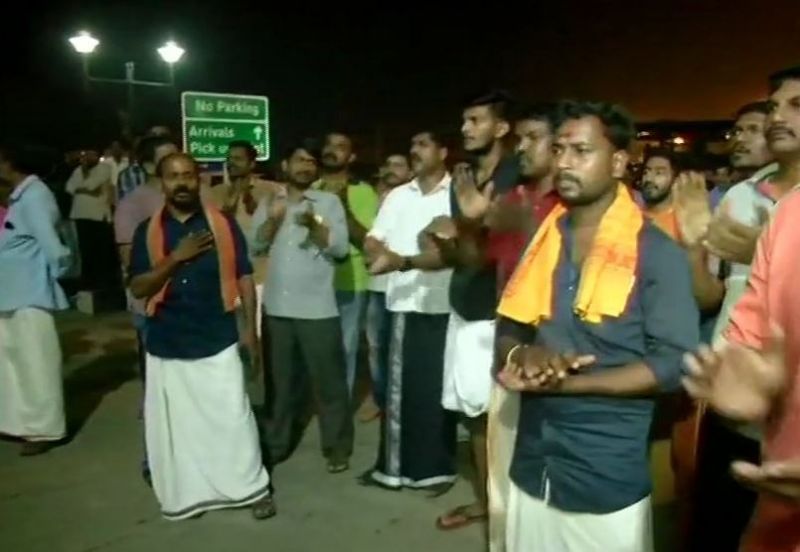 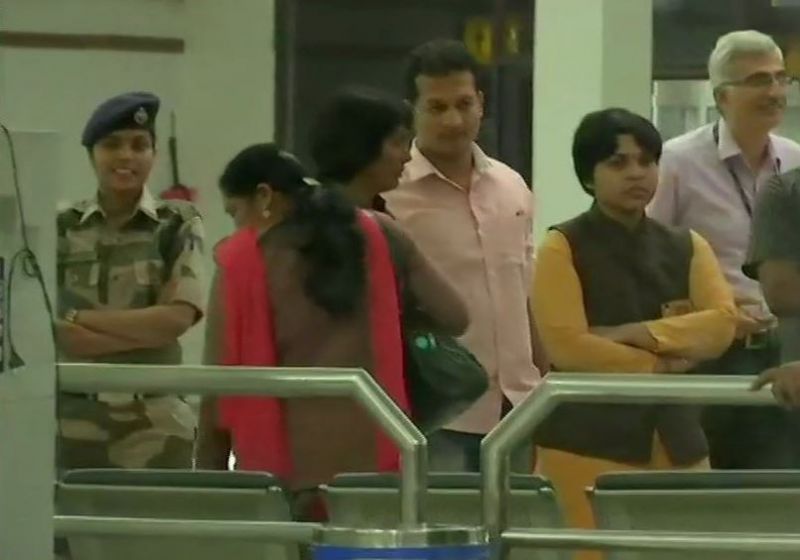