Protesting BJP leaders at the airport said devotees would not let Desai to come out of airport and proceed to Sabarimala. 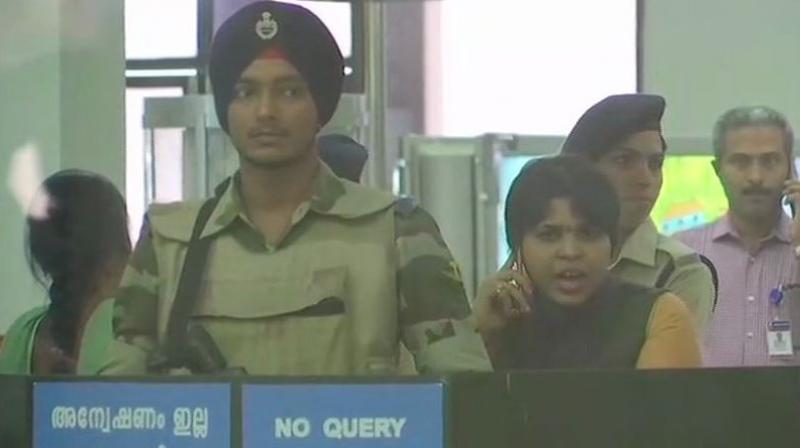 Talking to media over phone, activist Trupti Desai said she would not go back to Maharashtra without a darshan at the Lord Ayyappa temple. (Photo: Twitter | ANI)

Kochi:  Activist Trupti Desai who reached the Kochi International Airport in the early hours of Friday to visit the Sabarimala temple could not come out of the domestic terminal following protest by devotees opposing the entry of menstrual women into the Lord Ayyappa temple.

Tension prevailed at the airport as protesters announced that Desai and her colleagues, who reached around 4.40 am from Pune, would not be allowed to go out of the airport.

The Sabarimala temple opens on Friday evening, for the third time since the Supreme Court verdict on September 28 allowed women of all age group to offer prayers at the hilltop Lord Ayyappa temple though none could do so following stiff resistance from devotees and activists, opposing any change in the temple traditions.

Protesting local BJP leaders at the airport said the devotees would not let Desai and her colleagues, reportedly total six in numbers, to come out of the airport and proceed to Sabarimala temple. They alleged that Desai and her team came here to violate the centuries--old custom of the temple that prevents entry of women and girls in the age group of 10 and 50. "She (Desai) came here not for darshan but for disturbing a peaceful Sabarimala pilgrim season beginning Saturday," they said.

Police officers held discussions with Desai and protesters but both sides stick to their stand.

"Won't allow Trupti Desai to go out of airport even she is being escorted with police vehicle or other government means. Airport taxies also won't take her. If she wants, she can use her own vehicle. There will be agitations all along her way even if she goes out from airport," BJP's M N Gopi said.

Talking to media over phone, Desai said she would not go back to Maharashtra without a darshan at the Lord Ayyappa temple. Taxi drivers at the airport said they would not take Desai and her colleagues outside the airport.

Talking to news agency ANI, enroute Kerala, Desai said she has been receiving threats of attack and killing.

Desai, who spearheaded the campaign for women to be allowed into various religious places, including Shani Shingnapur temple, the Haji Ali Dargah, the Mahalakshmi Temple and the Trimbakeshwar Shiva Temple, had sent an email to Kerala Chief Minister Pinarayi Vijayan seeking security as she fears an attack on her life during her visit to the hill shrine.

"We will not return to Maharashtra without darshan at the Sabarimala temple. We have faith in the government that it will provide security for us," she had said.

"It is the responsibility of the state government and the police to provide protection and take us to the temple as the Supreme Court has allowed women of all ages to offer prayers at the shrine," she added.

Following the apex court’s September 28 verdict, not a single woman of the menstruating age could reach the shrine due to stiff resistance from devotees and activists, opposing any change in the temple traditions.