There are no food crises but those who have marriages in their house are in real trouble. 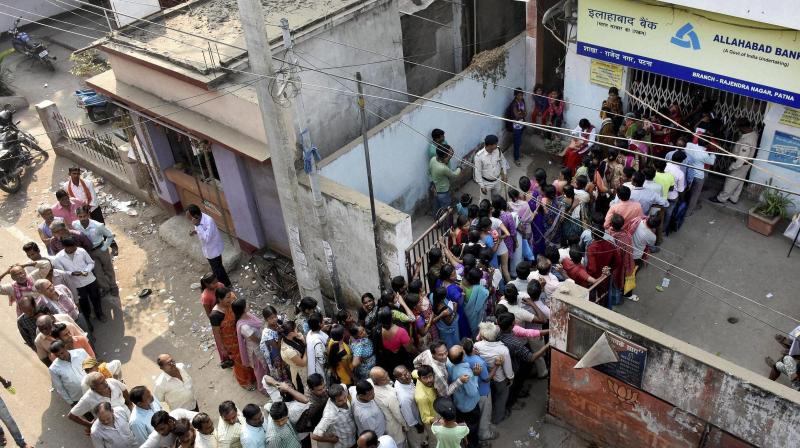 People queue up outside an ATM in Patna on Saturday. (Photo: PTI)

Patna: There was no respite from long queues outside banks and ATMs even seven days after the demonetisation of high-value currency notes of Rs 500 and Rs 1000 on Tuesday.

Normal life remained paralysed in Bihar, particularly in rural areas, where people faced a lot of inconvenience without cash. According to reports, villagers are buying day-to-day items on credit from local shopkeepers.

“In villages, there are no food crisis, but those who have marriages in their house are in real trouble. They are lining up outside banks but don’t get enough money to pay bills,” said Ashish Kumar, a farmer from Siwan.

In many places, he said, scuffle broke out and the police had to rush to the spot to control the situation. In Darbhanga on Monday, an elderly, Kishan Ram, who had gone to deposit money in a bank, died, sources said, adding that he couldn’t bear the rush and started bleeding from his mouth he later died at the hospital.

A bride’s father in Kaimur died of a heart attack on Sunday, fearing that the groom might not accept Rs 35,000 which he had saved for dowry. The victim, Ram Awadh Sah, had fixed the marriage of his eldest daughter, which was supposed to take place early next year.

“He was tensed ever since the government’s demonetisations decision and feared the groom’s family would not accept tilak,” a relative said. In last one week, protests by angry people facing cash crunch were reported from several districts, including Patna, Siwan, Gopalganj, Muzaffarpur and Madhubani.