Regrettably, one of the countries of its origin and spread is in India’s neighbourhood,” Modi said. 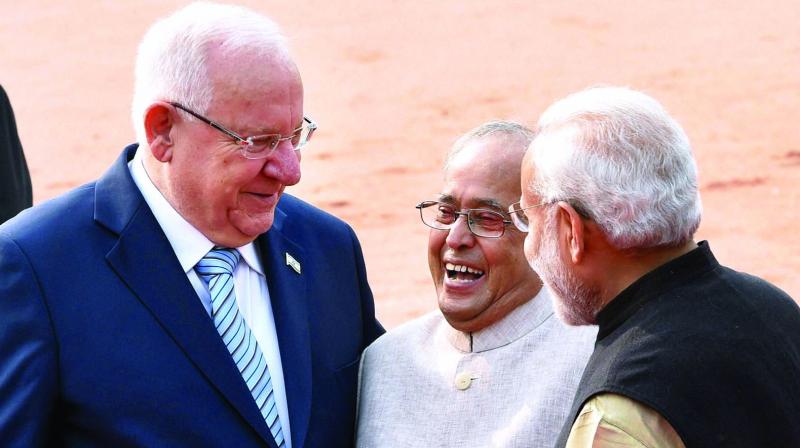 New Delhi: Reflecting rapid upswing in ties, India and Israel on Tuesday decided to “broad-base” their already close defence partnership and agreed to intensify cooperation in combating radicalism and extremism while calling for tough global action against terror networks and States harbouring them.

In a media statement after the talks, PM Modi made a veiled attack on Pakistan, saying one of the countries in India’s neighbourhood has been supporting terrorism, adding he and Rivlin agreed to intensify bilateral cooperation in combating terror. “We recognise that terrorism is a global challenge, knows no boundaries and has extensive links with other forms of organised crime.

Regrettably, one of the countries of its origin and spread is in India’s neighbourhood,” Modi said.

Prime Minister Modi said both the countries agreed that the international community must act with “resolve and determination” against terror networks and States that harbour them.

“Failure to act and silence of speech only encourages the terrorists. We agreed to intensify our cooperation to combat the forces of extremism and radicalisation that threaten all peace loving nations,” he said.

On his part, Rivlin, the first Israeli President to visit India in nearly 20 years, said both India and Israel were threatened by terrorism as the two countries uphold values of freedom and that nothing can justify terror. He said India and Israel will be together in fighting the menace.

Referring to growing collaboration between the two countries, particularly in the defence sector, President Rivlin said his country is ready to “make in India and make with India”.

Noting that Rivlin’s visit has given a “crucial push” to efforts to build “new pillars” in ties, Modi said both sides noted the strength of the growing defence partnership and agreed on the need to make it “more broad-based” through production and manufacturing partnerships.

Referring to Israel’s expertise in micro-irrigation in drought-prone areas, the Prime Minister said water management and conservation, and collaboration in scientific research were identified as areas for priority engagement.

“As fellow democracies, our people are our biggest strength and the biggest beneficiaries of a strong India-Israel partnership. The 2000-year old Jewish community in India represents a thriving link to this past. Today, it is a vital part of our composite cultural mosaic that continues to thrive in their traditions. We are proud of the Jewish community in India. President and I agreed that promoting people-to-people contacts, which has a long shared history, is our shared priority,” PM Modi said.

India is Israel’s largest buyer of military hardware and the latter has been supplying various weapons systems, missiles and unmanned aerial vehicles over the last few years but the transactions have largely remained behind the curtains.