India   All India  16 Nov 2016  Farmers in a stew, leave vegetables to rot in Bhopal
India, All India

Farmers in a stew, leave vegetables to rot in Bhopal

The cash-crunch caused by the measure had led to the closure of the government-run “mandi” for a week from November 8. 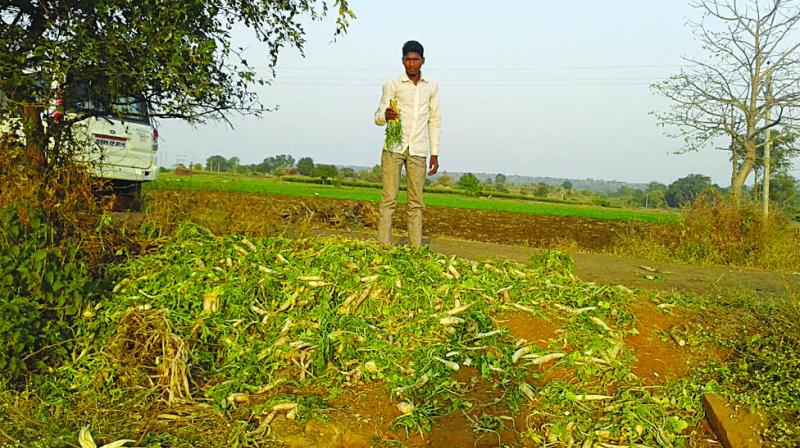 A farmer standing beside a heap of rotten carrots harvested in his fields. (Photo: Asian Age)

Bhopal: Heaps of rotten vegetables lined along agriculture fields in the tribal village of Kekadi located close to Retapani reserve forest, on the outskirt of Bhopal city, are a testimony to the misery that has befallen on the local farmers by the Centre’s demonetisation of two high-value currency notes. The cash-crunch caused by the measure had led to the closure of the government-run “mandi” for a week from November 8. The farmers failed to sell their produce and allowed them to perish near their fields after their harvest. “The agents even expressed their inability to procure our yields citing cash-crunch. Hence, we left our produce to rot beside the fields after harvest,” 21-year-old tribal farmer Mukesh Tomar said. He had grown carrot and brinjal crops in his 4-acre agriculture land.

He said businessmen wanted to buy their produce if they were willing to accept Rs 500 and Rs 1,000 notes, saying “we should deposit them in our accounts to get our dues”.

“How can we accept the notes which are not valid?” he said. The entire farmer community in their village is now looking at the state government to bail them out in the crisis.