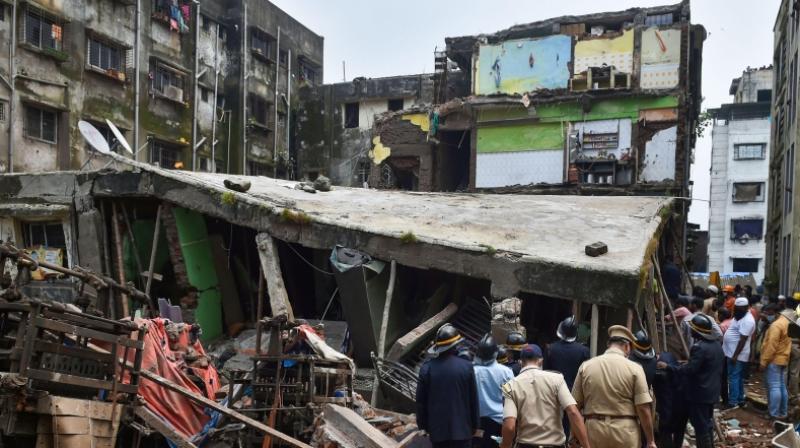 Mumbai: The Maharashtra government on Wednesday, informed the court that it was also concerned about unauthorised structures that were collapsing and causing loss of lives. State also said it was in the process of identifying dilapidated and unauthorised buildings and highlighting such issues for the consideration of the HC, so that steps may be taken to avoid dangerous situations similar to the Bhiwandi building Collapse of last month that resulted in the loss of 41 lives. The state informed the court that it will come out with an appropriate scheme for effectively dealing with the same. The court was hearing a suo motu petition pertaining to Bhiwandi building collapse.

On Thursday, Advocate General Ashutosh Kumbhakoni submitted an affidavit, signed by Shankar Jadhav, Deputy Secretary of Urban Development department, stating it had observed that buildings are collapsing in every rainy season causing heavy loss of human lives. Considering this, the state government had issued a circular to all urban bodies prescribing guidelines to classify the old or dilapidated buildings into various categories and take measures to deal with the issue.

The state government further said that in many cases of unauthorised constructions, the illegally constructed tenements are sold out to innocent purchasers, who ultimately are cheated and suffer on demolition of such illegal structures.

The affidavit stated, “Therefore, the state-issued circular in May, 2018 prescribing procedure to be followed while taking action against such unauthorised structures in terms of MRTP Act. The state is committed to take appropriate steps so that such incidents are not repeated.”

Kumbhakoni eventually requested the court to grant adequate time to the state government to check ground realities and to see what steps were taken by the local bodies so far. Accordingly, further course of action would be decided, Kumbhakoni said.

Seeking remaining replies by October 23,  a division bench of Chief Justice Dipankar Datta and Justice Girish S. Kulkarni directed state UDD officers to examine and submit measures taken by each municipal corporation against unauthorised structures in their areas, and file a comprehensive reply in affidavit by October 26.

Thereafter, the court directed the amicus curiae senior counsel Sharan Jagtiani assisting it with the case, to file a report on submissions made by the respondent authorities by October 28 and posted further hearing to October 29.