'...it so happens that when complaint against PM Modi's minister comes, he keeps quiet', Rahul Gandhi said. 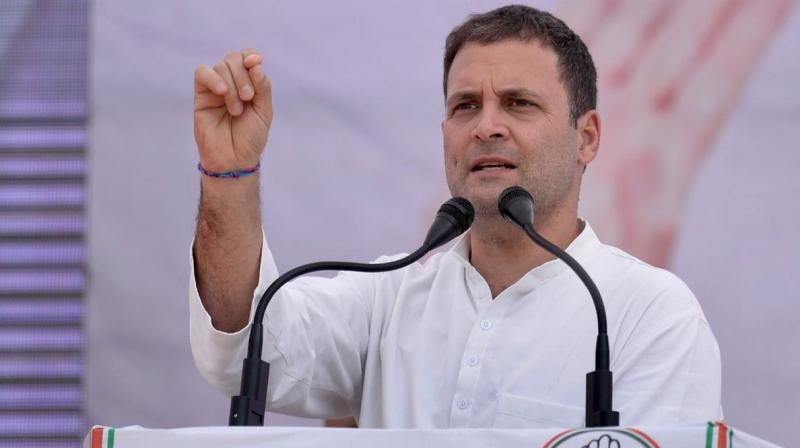 Rahul Gandhi is on a two-day tour of Madhya Pradesh where Assembly polls are scheduled to take place on November 28. (Photo: Twitter | @INCIndia)

"Modiji says 'beti padhao, beti bachao' but it so happens that when a complaint against his minister comes, he keeps quiet," Gandhi said while addressing a public meeting in Joura area of Morena district of Madhya Pradesh.

The Congress leader did not name any minister but was apparently referring to Akbar who is in the thick of a storm because of allegations of sexual harassment levelled against him by a number of women journalists.

Akbar, a former journalist, has rejected the allegations against him and has filed a defamation case against one of the complainant journalists.

Gandhi, in his address, went on to attack PM Modi over various other issues.

Gandhi is on a two-day tour of Madhya Pradesh where Assembly polls are scheduled to take place on November 28.

Significantly, Tuesday's public meeting in Joura was attended by senior Congress leader Digvijay Singh, who had been conspicuous by his absence during most of the programmes and rallies addressed by Gandhi in Madhya Pradesh over the last few weeks.

Among the state leaders, Gandhi has been mostly accompanied by state Congress president Kamal Nath and the party's campaign committee chief Jyotiraditya Scindia during his programmes in Madhya Pradesh.

Earlier in the day, a video went viral in which Digvijay Singh is heard saying that his party's votes get reduced if he campaigns for it.

Continuing his tirade against the prime minister, Gandhi said PM Modi had "claimed that he wants to be a 'chowkidar' (watchman of the country) but he actually proved to be a 'chowkidar' of Anil Ambani, Mehul Choksi and Nirav Modi and has been working for them since last four years."

He said the cost of petrol and diesel has shot up drastically. "They pull out money from your pocket and put it in the pockets of 15-20 big businessmen," he said.

"I have not come here to make false promises. You have got in the habit of hearing lies from Modiji and Shivraj ji (Madhya Pradesh chief minister Shivraj Singh Chouhan). But I assure you that Rahul Gandhi does not speak lies from the stage but makes honest promises which I am going to fulfill," he said.

Later, the Congress president conducted a road show from Joura to Morena.

Assembly polls in Madhya Pradesh are due on November 28 and the counting of votes will take place on December 11.