The PM will also participate in the Gujarat Gaurav Mahasammelan to be held at Bhat gam near Gandhinagar in the afternoon. 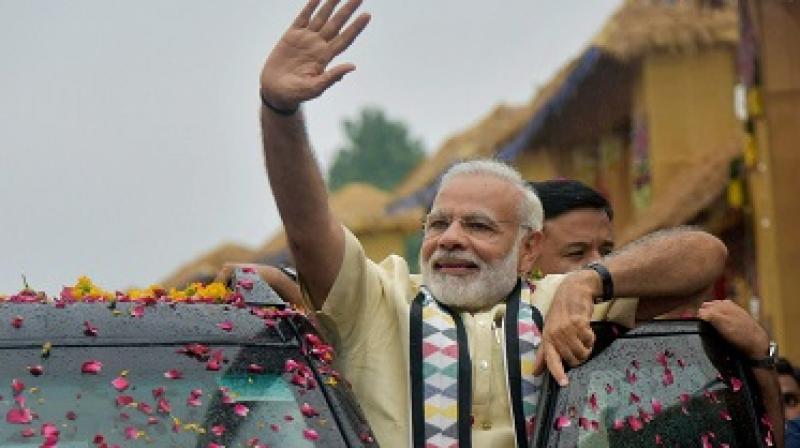 New Delhi: Prime Minister Narendra Modi will visit his home state Gujarat on Monday and address a rally of BJP workers gathering from across the state.

He will also participate in the Gujarat Gaurav Mahasammelan to be held at Bhat gam near Gandhinagar in the afternoon.

The function will mark the conclusion of 15-day long Gujarat Gaurav Yatra. The BJP started the yatra from two routes - one from Karamsad on the first of this month and another from Porbandar on October 2.

BJP president Amit Shah will also be present at the concluding ceremony of the Yatra.

The Gaurav Yatra was meant to highlight the achievements of the BJP government in the State.

The first leg of the yatra started from Karamsad, the native place of Sardar Patel on October 1, and travelled through districts of Central and North Gujarat, whereas the Second leg started on October 2 from Porbandar, the birthplace of Mahatma Gandhi, which passed through Saurashtra and South Gujarat.

Various Union Ministers including home minister Rajnath Singh, I & B Minister Smriti Irani addressed rallies at different places during the yatra. The yatra covered total 149 constituencies of the state and travelled more than 4000 kms.

Last week, Modi had visited Gujarat to inaugurate and lay foundation stones of various projects in Rajkot, Vadnagar, Gandhinagar and Bharuch. He had also held a roadshow in his hometown Vadnagar on October 8.

Assembly elections are due in Gujarat later this year.