Addressing a rally in Gujarat, the PM said, 'Congress is an equal partner in GST decisions. They should not spread lies on GST.' 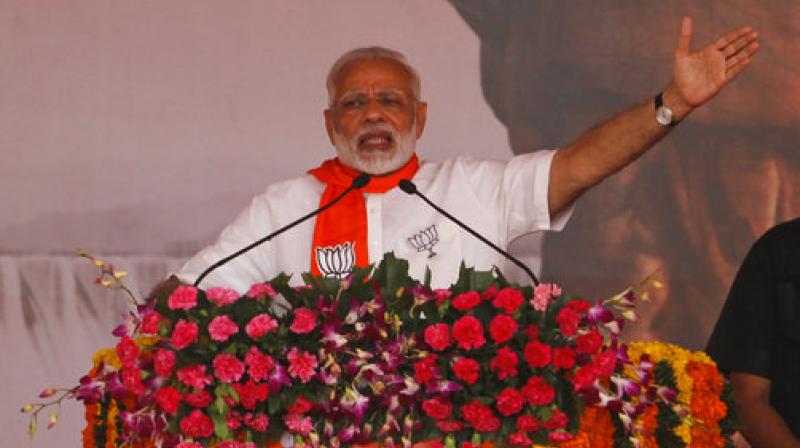 Sounding the poll bugle for Gujarat Assembly election, Prime Minister Narendra Modi said he wishes Congress to fight for once on the issue of development. (Photo: AP)

Addressing a mammoth Gaurav Mahasammelan in Gandhinagar in poll-bound state Gujarat, "Congress is an equal partner in GST decisions. They should not spread lies on GST."

The Prime Minister said the Congress never focused on service and involved in dynastic politics.

Sounding the poll bugle for Gujarat Assembly election, Modi said he wishes Congress to fight for once on the issue of development.

"I had hoped that this time they would take the BJP's challenge of fighting on the issue of development. But they have not done so," he added.

Modi said that there was a "saffron wave" everywhere, while adding that the development politics of the BJP will beat Congress' dynastic politics.

The Prime Minister went on to say, "BJP is party of workers not dynastic politics and politics of development will take over politics of dynasty soon. I can see saffron wave everywhere across the country. BJP is an organisation committed to serve nation."

He also accused the Gandhi family of insulting non-Gandhis and said, "Non-Gandhis have always been insulted in the Congress. They don't like Gujarat and Gujratis. When Morarji Desai became prime minister, they spread rumours about what he drank and what he didn't. They didn't talk about his ideals, about his dedication to Mahatma Gandhi's cause."

The Prime Minister also accused Congress of planning to send him and Amit Shah to jail for serving Gujarat.

Talking about the Narmada project, he said Congress stalled the project.

"Congress didn't want Naramada dam. Congress stalled many projects which the BJP has revived. Congress has left many Gujarat projects unfinished. Had the work of Narmada been completed 50 years back, Gujarat would have been at a higher dimension" he added.

In his address, the Prime Minister compared elections with yagya and said, "In a democracy, elections are a yagya. All soldiers of democracy must use that yagya to do more good. However, since the ages of Ramayana and Mahabharata, we have seen that when there is yagya, there are always those who try to cause problems."

The Prime Minister concluded his speech by extending Diwali greetings to those gathered in the mega rally.

BJP president Amit Shah was also be present at the concluding ceremony of the Yatra.