The Bihar government will conduct a survey to save the Gangetic river dolphins. 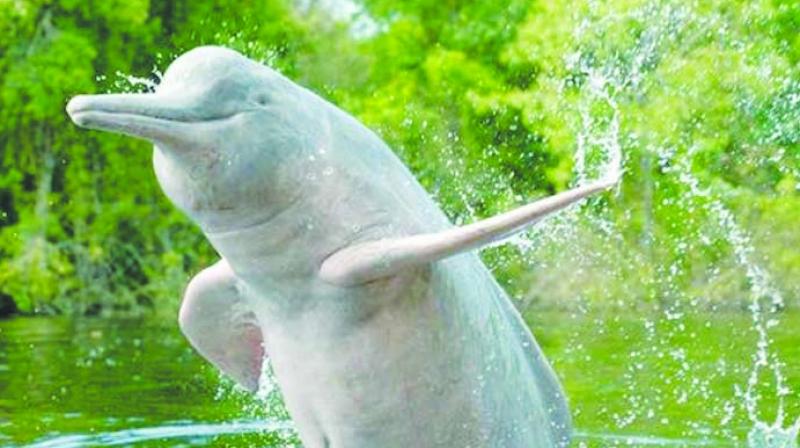 Patna: Fighting to check the decreasing population of rare Gangetic dolphins, activists and researchers have warned of a grave threat to the endangered aquatic mammals in Bihar form a proposed national waterway project.

The proposed waterway for cargo vessels is likely to pass through Bhagalpur district, which has the only dedicated reserve for these aquatic mammals in the country.

"There will be a high level of threat to dolphins and other aquatic species if heavy commercial vessels are allowed navigate in the Ganga. Since Gangetic river dolphins are effectively blind, the biggest problem for them will be from noise pollution and the propellers of large vessels," Dr. R.K Sinha, a dolphin expert in Patna, told this newspaper. 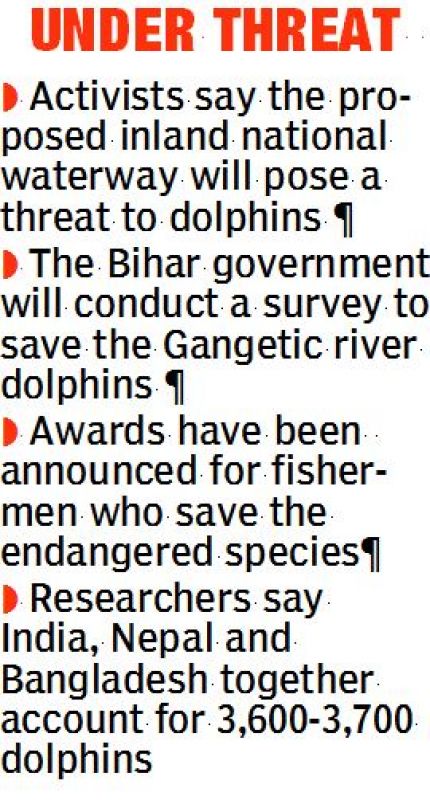 The Bihar government has now decided to conduct a survey to save the endangered dolphins and announced awards for fishermen who save endangered species.

Deputy Bihar chief minister Sushil Kumar Modi said, "Attempts will be made not just to save the Gangatic dolphins, but also increase their population."

The state government claimed that the Centre has agreed to spend `4,275 crores for cleanliness of Ganga under Prime Minister Narendra Modi's pet Namami Gange Programme - National Mission for Clean Ganga.

Recently, the Centre announced plans to develop a 1,391-km-long waterway between Haldia in West Bengal to Varanasi in Uttar Pradesh via Bihar under the Jal Vikas Marg project with the financial support from the World Bank. The aim of the project will be to create a channel to ply heavy commercial vessels in the Ganga.

But environmentalists are worried that the proposed inland national waterway that will pass through four states, including Bihar and Uttar Pradesh, may affect two significant aquatic sanctuaries - Vikramshila Dolphin Sanctuary in Bhagalpur and the Turtle sanctuary in Varanasi.

According to latest figures, the most number of Gangetic river dolphins are found in Bihar. Researchers say that India, Nepal, and Bangladesh together account for 3,600-3,700 of such dolphins.

Data shows that the population of Gangetic river dolphins in Bangladesh is 500 and Nepal it is 50. Within India, 500 dolphins were spotted in the Brahmaputra, 1,500 in Bihar and 2,500 were recorded in Ganga basin.

The mammal is listed in the Schedule 1 of the Indian Wildlife (Protection) Act, 1972, and categorised as "endangered" by the World Conservation Union. The central government recognised the dolphins as a national aquatic animal in 2009.