More than 3.5 lakh workers have been laid-off in the auto sector alone in last two months. 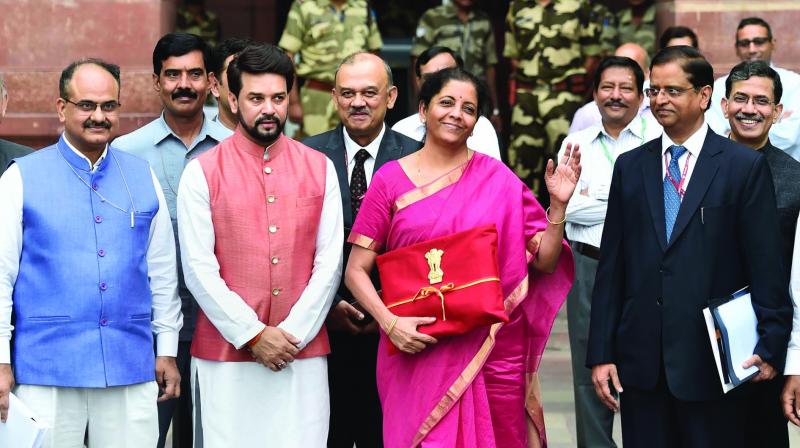 Can the finance minister stop the spiralling slowdown?

Despite the dismal GDP growth rate of five per cent in Q1, FY20, which is the slowest in six years, political sentiments continue to score over economic concerns, in the current Government’s policy decision making. The low inflation rate of three per cent which the government showcases, comes at the cost of farmers and their incomes; as cost of food and hence agricultural produce remains low. Unemployment is at an all-time high at 6.1 per cent. More than 3.5 lakh workers have been laid-off in the auto sector alone in last two months.

Abysmal consumption levels and sluggish investment are being painted as the villains of the India growth story. How is consumption supposed to pick up when jobs are being hacked and the farmer, the backbone of the Indian economy, is being shortchanged? Government spokespersons state this decline in the GDP growth rate is a small dip and that the fundamentally strong Indian economy will pick up steam in the next few quarters. Nothing could be farther away from the truth.

A look at the investment scenario reveals the following:

Business owners, who should partner the Government in the economy’s growth are hounded for taxes. Capital investment, both private and government, in new projects plunged to a 15-year low, declining by 81 per cent in Q1, FY20, compared to Q4, FY19, and 87 per cent when compared with Q1, FY19. Without a significant hike in capital investment, new employment opportunities cannot be created.

Road Infrastructure Development, considered a sure-fire way of stimulating the economy, is essential for any development agenda. After the NDA government came to power in 2014, the National Highway Authority of India (NHAI), abandoned the traditional Built-Operate-Transfer model for the Hybrid-Annuity-Model. NHAI’s outstanding debt in Q1, FY20 has ballooned to Rs 1.78 lakh crore compared to Rs 40,000 crore in FY14. The letter from the Prime Minister’s Office to NHAI increases skepticism in the industry about the future of the road projects, changing business models and ability of the NHAI to service debts.

The government introduced fresh surcharge on Foreign Private Investment in the 2018 Union Budget.  The surcharge was subsequently withdrawn but the confidence of international investors has been shattered. Foreign Institutional Investors are net sellers for the period April-August, 2019 and this trend continues in September 2019.

Non-performing assets have ballooned ever since 2014 but cases of only six out of the twelve delinquent borrowers, flagged by the RBI, have been resolved to-date. The insolvency law’s 270-day resolution deadline is derailed owing to conflicting-regulations and lack-of-resolution-infrastructure. Instead of seeking resolution to the NPA problem, the finance minister has announced the merger of ten (10) Public Sector Banks into four (4) which straightens NPAs in book-keeping only.

Further, credit off-take from Non-Banking Financial Companies (NBFCs) in Q1, FY20 declined by 28 per cent compared to Q4, FY19 and 30 per cent, when compared to Q1, FY19. To help out the stressed sector, and provide credit liquidity in the market, RBI, in August 2019, eased norms for lending from banks to NBFCs for onward lending to agriculture, micro and small enterprises, and housing, as priority sector lending. Impact of RBI’s intervention will be evident in Q3, FY20.

However, Reserve Bank of India (RBI) too could not escape the aggression on autonomy of institutions witnessed in recent times. The Bimal Jalan Committee recommended the transfer of `1.76 lakh crore surplus funds from the RBI to the Union government. This is it’s highest ever transfer. This knee-jerk reaction to the slowdown, includes Rs 1.23 lakh crores as dividend to the government and Rs 52,637 crores from the RBI’s Contingency Risk Buffer (CRB). A CRB is required to be maintained by the Central Bank to absorb future contingencies. This is a clear compromise with the financial stability of the country.

It is getting clearer by the day that the country is headed towards a major economic crisis. This is a classic case of slowdown under expansionary trends. The government’s economic interventions, have clearly, not got the desired results. Short-term stimulus remains short-term, and can only help in assuaging wounds. The present government lacks ideas, and has its hopes pinned on natural recovery.

India has the potential to grow at a much faster rate, but for the all-round mismanagement by the current government. The economy has still not recovered from the man-made blunders of demonetisation and flawed implementation of GST. We need to think of innovations and new ideas to improve public and private investment in the economy. Until and unless, purchasing power and liquidity doesn’t reach to the last person of rural economy, we can’t expect major improvement in consumption, and unemployment. A new think-tank, and clear economic focus on growth, is required to steer the Indian economy away from imminent economic disaster.

The writer is a national spokesperson of the Congress Party