Acquiring Apache helicopters is good news for the Air Force

Hopefully, the entry of the Apache will begin a process of making good our glaring and long-standing deficiencies. 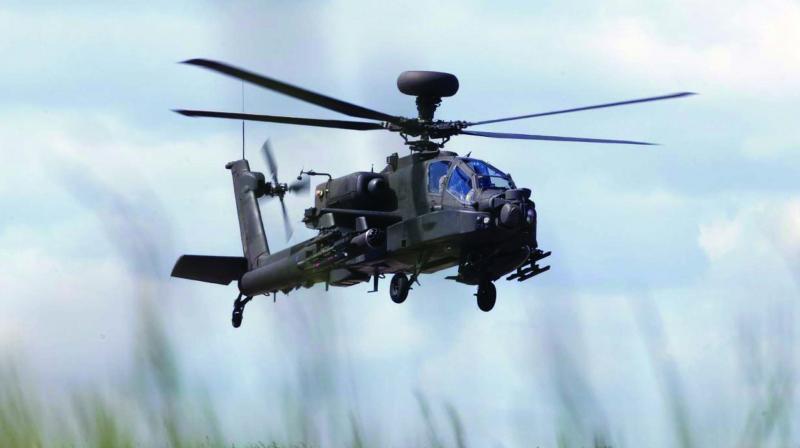 Two events of the Indian Air Force (IAF), significant both for what they were and where they were held, made good news. The first was Chief of Air Staff (CAS), Air Chief Marshal B.S. Dhanoa, PVSM, AVSM, YSM, VM, ADC flying a MIG-21 Bison, choosing as his co-pilot Wing Commander Abhinandan Varthaman, VrC, the slim, crew cut-haired, handlebar moustached (now trimmed) air warrior, who shot down a Pakistan Air Force (PAF) US-made F-16 a day after the IAF accurately destroyed a Pakistani terrorist training camp in Balakot, Khyber Pakhtunkhwa, Pakistan. The second event, soon after, was the induction of the Apache helicopters — both at Air Force Station, Pathankot.

CAS Dhanoa, desiring to fly his last sortie before retirement, made it historic and touching by choosing Mr Varthaman as his co-pilot. Because both ejected out of their targeted aircraft, both were grounded owing to their ejection-related effects on the body, and were allowed to resume flying after CAS, eight and Mr Varthaman, six months, and both were hit while air-battling the Pakistan Air Force in the same MIG-21/Bison aircraft. Mr Varthaman downed the PAF’s American F-16 before his own aircraft got hit.

But that was all. The greatest bond was that CAS Dhanoa had flown the same MIG-21s with Air Marshal Simhakutty Varthaman, PVSM, AVSM, VSM (Retd.), Mr Varthaman’s father. “This is my last sortie on a fighter jet. Both of us have two things in common — first, both of us ejected and second, both of us have fought Pakistanis. I fought in Kargil, he fought after Balakot. And third, I’ve flown with his father. It’s an honour for me to do my last sortie in the IAF in a fighter aircraft with his son,” the Air Chief Marshal reportedly said.

CAS Dhanoa was the lead pilot in the front cockpit, with Mr Varthaman in the rear cockpit. Taking off from Pathankot Air Force Station airfield, they flew for about 30 minutes in the trainer version of the MiG-21 Bison combat aircraft.

During the 1999 Kargil War, the IAF Chief commanding the 17 Squadron of MiG-21s played an important part. His deputy, Squadron Leader Ajay Ahuja, was shot down by Pakistani ground troops while he went to search and locate Flt. Lt. Nachiketa whose plane had also been shot down.

In February this year, it was under the aegis of CAS Dhanoa that a special surprise air attack by night was meticulously planned to target a camp of Jaish e Mohammad terrorists hidden on a hilltop in Balakot.

On February 27, 2019, when PAF aircraft attempted to attack Indian Army locations, the IAF’s Mirage-2000, Sukhoi-30 and MiG-21 Bison aircraft intercepted them. The PAF’s F-16s supplied by the US for use against terrorists in Pakistan were used for multiple missile launches. Prompt action by the IAF’s Su-30s defeated a missile, parts of which fell in the area east of Rajouri in J&K, injuring a civilian on the ground. A detailed report released by the IAF and all the Su-30 aircraft engaged in combat landing safely back nailed Pakistan’s lie of the PAF shooting down a Su-30. This false claim was made by Pakistan to try to cover up for the loss of its own aircraft downed by Wing Commander Varthaman from his MIG-21 Bison. Shortly afterwards, his Bison got hit and he ejected. Eventually PAF aircraft were forced to withdraw in a hurry, quite evident from the large distances of the weapons they dropped.

Wing Commander Varthaman’s ordeal began as he fell into Pakistani territory and got roughed up by the locals and was eventually seized by the Pakistani Army. He was returned by Pakistan on March 1, 2019, after concerted diplomatic pressure from India for his release. He was awarded a Vir Chakra, conferred on him on Independence Day, August 15, 2019.

Flown by the US Army, the AH-64E Apache is considered as one of the world’s most advanced multi-role combat helicopters, and India is the 14th nation in the world to be acquiring Apache attack helicopters, receiving the first eight of 22, for which a multi-billion dollar contract was signed with the US government and Boeing Ltd. in September 2015.

During a ceremony at Pathankot IAF base, where Air Chief Marshal Dhanoa, the chief guest, was received by AOC-in-C, Western Air Commander Air Marshal R. Nambiar, a “puja” (prayer) was performed to consecrate the new helicopters and they were given a water-jet salute.

Addressing the gathering, CAS Dhanoa said, “Apache attack helicopters are being purchased to replace the Mi-35 fleet. Alongside the capability to shoot fire and — forget anti-tank guided missiles, air-to-air missiles, rockets and other ammunition — it also has modern EW (early warning) capabilities to provide versatility to the helicopters in network centric aerial warfare. Apaches have been an integral part of numerous historic campaigns worldwide. These aircraft have been modified specifically to suit the exacting standards demanded by the IAF. I am happy to note that the delivery schedule is on time with eight helicopters already being delivered.”

While the Apache has been in service since 1984 with over 2,100 machines produced, the version that India is purchasing is the latest Block III configuration that the US first got in 2011. It is capable of delivering a variety of weapons, which include air-to-ground Hellfire missiles, 70 mm Hydra rockets and air-to-air Stinger missiles. It also carries one 30 mm chain gun with 1,200 rounds as part of its area weapon sub-system. To add to the lethality of the helicopter, it has a fire control radar, which has a 360 degree coverage and a nose-mounted sensor system for target acquisition and night vision. The radar automatically searches, detects, locates, classifies, and prioritises fixed and moving targets on land, sea and in the air in all weather environments and battlefield conditions. According to Boeing, the AH-64 is capable of classification and threat-prioritisation of upto 128 stationary targets in less than a minute and engage with 16, which is impressive. Apart from that the Apache AH-64E also has st
ealth characteristics, advanced sensors and beyond-visual-range missiles.

Interacting with this writer, the IAF spokesperson, Group Captain Anupam Banerjee said, “As of now, we have eight aircraft. 22 aircraft will come in a phased manner… this aircraft brings in lethal firepower with great accuracy.”

Additionally, the defence ministry in 2017 approved the procurement of six of these Apache helicopters for the Army. These will be the Army’s first fleet of attack choppers.

The acquisition of the Apache Attack Helicopter is a significant step towards modernisation of the Indian Air Force helicopter fleet and enhancing the capability of the IAF in providing integrated combat aviation cover to the Army’s strike formations.

While all versions/configurations of Mikhail (Mi) helicopters and MIG fighters have a rich history of participating in many operations since their induction, but what amazes Russian aircraft manufacturers, some of who this writer has interacted with, is how the IAF’s aviators have flown these machines for far longer than the parameters set by them. If the attack helicopters have been used by the IAF for 36 years, for the MIG-21, the oldest has completed 50 years. It is also a reflection of the lackadaisical — to say the least — to the almost contemptuous attitude of the politico-bureaucratic establishment under successive Congress governments.

The IAF is at least 12 squadrons short of its desired requirements. Hopefully, the entry of the Apache and other helicopters as well as Rafale and other jet fighters sanctioned by the BJP government will begin a process of making good our glaring and long-standing deficiencies.