AP tourism minister Rao said boat did not have permission to take tourists to Papikondalu. 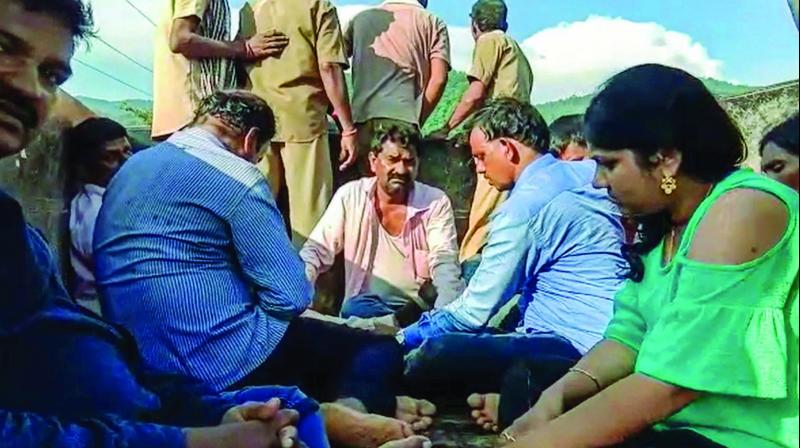 Survivors of a boat which capsized in the swollen Godavari river are rescued in East Godavari district of Andhra Pradesh on Sunday afternoon. (Photo: PTI)

Kakinada: Thirteen persons drowned and another 35 went missing when a tourist boat, Royal Vasishta, capsized in Godavari in Devipatnam mandal of East Godavari on Sunday afternoon.

It was not clear whether the trip had been authorised by the officials or not. AP tourism minister M. Srinivasa Rao said that boat did not have permission to take tourists to Papikondalu.

Twenty-four tourists were rescued and a massive search operation has begun to trace them. According to officials, it would not be possible to salvage the boat at night.

The Navy has deployed helicopters into the search operation and teams from the NDRF and SDRF are scouring the river. The tourism department is engaging two speed boats.

Marine divers from Visakhapatnam have been called to trace the boat.

The tourists were mostly from Andhra Pradesh and Telangana state, among them seven from Hyderabad, 14 from Warangal Urban district and a family of seven from Visakhapatnam.

The tourists were on a joy ride to Papikondalu from Gandipochamma temple at about 10 am. Tragedy struck around 12.30 pm when the boat was reportedly caught in a  whirlpool in the vicintiy of Kachuluru Manda village in Devipatnam mandal of East Godavari and capsized.

Government sources said that the death toll stood at 13 at 7 pm, and 24 tourists had been rescued by nearby villagers. The rescued persons were rushed to the area hospital at Rampachodavaram for treatment.

Godavari has been in spate for the second time this year. The floodwaters were receding on Sunday but even so 5.28 lakh cusecs of floodwater was being let out into the sea.

Officials said that site of mishap was cut off from all kinds of telecommunications.

The district administration had suspended all tourist rides and stopped fishermen from operating their boats during the floods.

Rajahmundry municipal commissioner Sumitkumar Gandhi flew to the spot by helicopter to oversee the rescue operations.

Chief Minister Y.S. Jagan Mohan Reddy instructed officials to take up rescue operations and announced `10 lakh ex-gratia to the next of kin of the deceased.