The slain men, belonged to proscribed Lashkar-e-Tayyaba and Hizb-ul-Mujahideen outfits, as per security forces’ officials. 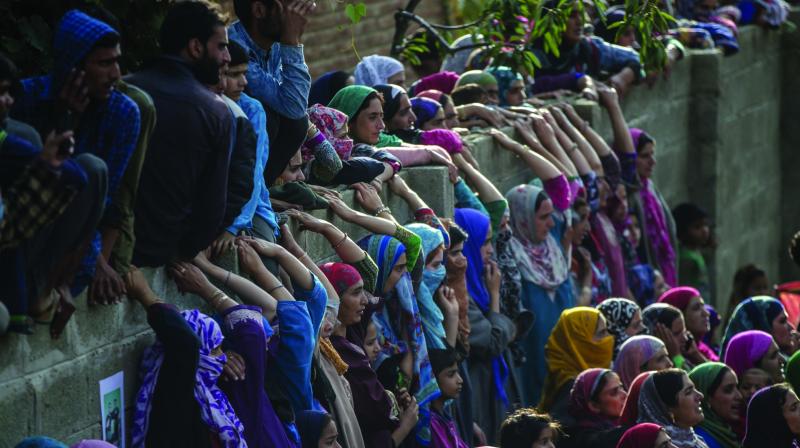 Srinagar: In what was termed by officials as ‘yet another breakthrough’ in their fight against terror the security forces on Saturday gunned down five militants in Jammu and Kashmir’s southern Kulgam district. A local youth was also killed when hit by a bullet in the neck during the streets clashes in the area.

The slain men, the J&K police and the Army said, belonged to proscribed Lashkar-e-Tayyaba (LeT) and Hizb-ul-Mujahideen (HM) outfits.

Their ringleader Gulzar Ahmed Paddar alias Saif figured in the list of most wanted militants for his involvement in a number of terror acts including the May 1, 2017 attack on a cash van of the J&K bank at Pombai village of Kulgam in which five policemen and two bank guards were killed, a police statement said.

Defence spokesman Colonel Rajesh Kalia said that the encounter took place in Chowgam village of Kulgam where the security forces including the Army and J&K police’s counterinsurgency Special Operations Group (SOG) had launched a cordon-and-search operation on Friday night after learning about the presence of militants.

“During the search operation, the militants hiding in a private house opened fire at the security forces triggering the encounter which continued through Saturday and ended with the killing of all the five holed up militants,” a police official here said.

The police claimed, “Initially, the civilians were moved away from the site of the encounter to safer locations.” “The security forces then engaged the terrorists in an encounter. the police added.

The police also claimed that other militants Faisal Rather and Zahid Mir killed in Saturday’s clash were also involved in the killing of policemen and special police officers and bank robberies in south Kashmir. “Their accomplice Zahoor alias Rehman Bhai and Mansoor were involved in series of terror offences besides recruitment bid (of youth into militant outfits) in the locality,” the statement said.

While the encounter at Chowgam was underway, irate crowds of youth took to the streets in the village and its neighbourhood to chant pro-freedom slogans. They soon clashed with the security forces.

The protests and clashes witnessed escalation after the killing of the militants, the witnessed said. The security forces fired live ammunition to quell the stone-pelting mobs at places in Kulgam resulting into injuries to over two dozen persons. A local youth identified as Rouf Ahmed Ganai from Chee area of Anantnag district was hit with a bullet in his neck and later succumbed to his injury in hospital, the hospital sources and witnessed said.

The police said that the three civilians including Ganai were caught in crossfire at the encounter site itself. Most parts of Kulgam and Anantnag observed a spontaneous shutdown over the killings whereas the authorities snapped internet services in south Kashmir districts and also suspended train services between Srinagar and Banihal “as a precautionary measure” in view of rising anger in Kulgam, Anantnag and the neighbouring districts.

‘Joint Resistance Leadership (JRL)’, the alliance of key separatist leaders, has called for a one-day shutdown in Kashmir on Monday to mourn and protest the killings.