Swaraj said she will interact with four Indian missions to mark PBD on January 9. 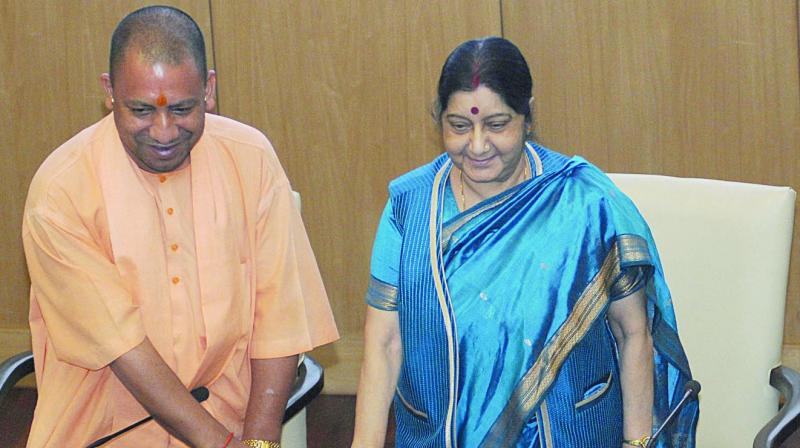 New Delhi: The 15th Pravasi Bhartiya Divas will be held in Prime Minister Narendra Modi’s constituency Varanasi in January next year and the Indian diaspora attending the event will also get an opportunity to participate in the Kumbh Snan and attend the Republic Day parade.

The announcement was made on Saturday with external affairs minister Sushma Swaraj and Uttar Pradesh chief minister Yogi Adityanath jointly launching a dedicated website for the event from January 21-23.

The government is touting the event as the first of its kind as the participants will witness the cultural heritage of Varanasi and of Allahabad during the Kumbh Mela. The theme of PBD 2019 is the Role of Indian Diaspora in building a New India.

Arrangements for the Kumbh Snan (holy bath) will be made at the sangam for the participants. Those interested in participating in the event can register on the Pravasi Bhartiya Divas website till November 15.  Talking to reporters here, Swaraj said Pravasi Bhartiya Divas (PBD) is held on January 9 every year, but the next edition of the event has been postponed by a few days after Indian diaspora expressed interest in attending the Kumbh Mela in Allahabad and Republic Day celebrations in New Delhi.

So this event will be held around the dates of the Kumb Mela and the Republic Day parade.

Swaraj said she will interact with four Indian missions to mark PBD on January 9. The main event will be launched by Prime Minister Narendra Modi on January 22.

“After the PBD convention, participants will be taken to Kumbh Mela by bus on January 24,” she said.