India   All India  16 Sep 2018  Father asked me to abort baby: T'gana woman after husband hacked to death
India, All India

Father asked me to abort baby: T'gana woman after husband hacked to death

P Pranay Kumar was hacked to death in broad daylight outside a hospital where he had taken his pregnant wife for a check-up. 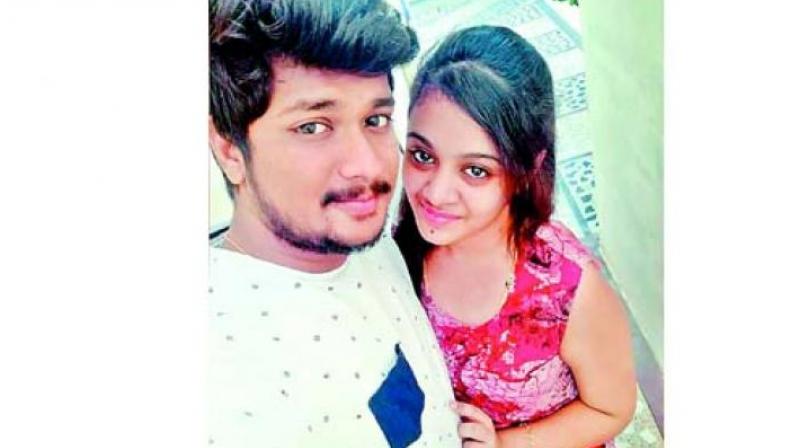 Amrutha and Pranay knew each other since 2011. The couple had fallen in love when they were in school. (Photo: File)

Hyderabad: Following her husband’s brutal murder over alleged ‘honour killing’, five-month pregnant Amrutha Varshini said her father insisted that she abort the baby after he got to know about the pregnancy.

Amrutha’s husband, P Pranay Kumar was hacked to death in broad daylight outside a hospital where he had taken his pregnant wife for a check-up at Miryalaguda in Nalgonda district on Friday.

The police have arrested Amrutha’s father T Maruthi Rao, a businessman, and her uncle T Sravan for the murder. Police suspect that they may have hired a contract killer.

According to a report in NDTV, Amrutha said, “My father said you abort the baby now. Live with him (her husband) for 2-3 years, after that I will accept the marriage."

“My father hails from a so-called upper caste but see his actions. Pranay, who was murdered for his so-called lower caste, was very kind to me and would help me in all my daily chores”, Amrutha was quoted as saying by The Times of India.

Amrutha and Pranay knew each other since 2011. The couple had fallen in love when they were in school. After an eight-year-relationship, the two decided to get married. The two got married on January 30 this year.

However, their families were against the relationship as Pranay belonged to Madiga Scheduled Caste while Amrutha belonged to the Vysya caste, reports added.

Amrutha claimed that the murder was pre-planned and her father had been keeping a tab on her movements. She further alleged that a recce was conducted before the murder.

A video posted on Facebook by Amrutha, in which she was seen living happily with Pranay, also reportedly infuriated her father.

The situation was tense in Miryalaguda following the murder with rights activists taking out rallies against the killing and demanding justice for the victim.