When the Press stood up to power

The Emergency may not belong to the recent past; 40 years is a long time in the life of a people. 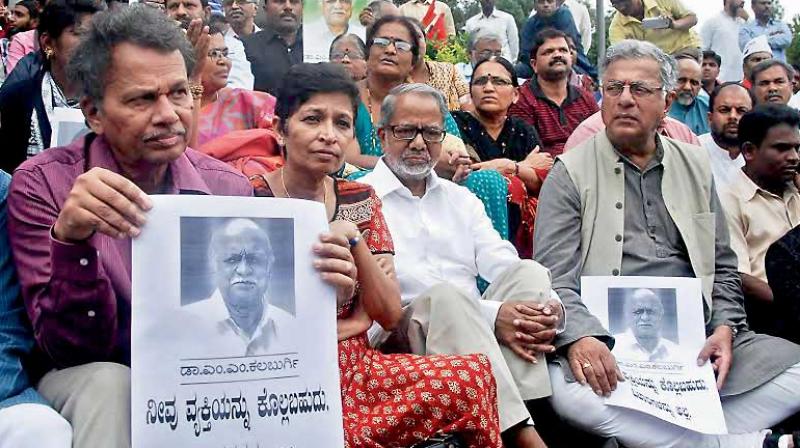 The late Gauri Lankesh (circled), who was murdered at her house on September 5, seen in this file picture with award winner Girish Karnad, and writers K. Marulasiddappa, Bargur Ramachandrappa when they mourned the death of renowned Kannada rationalist Dr M.M. Kalburgi, in Bengaluru.

The 19 months between June 25, 1975 and January 1977, many hold as the worst of times for the press in India. Pre-publication censorship, preventive detention of journalists, editors who disagreed with the regime being sacked by owners marked the period and news that was adversarial to the powers that be were not meant to be published.

Well, it’s not for nothing that the discipline of history, as a rule, seeks to skirt talking about the recent past. The Emergency may not belong to the recent past; 40 years is a long time in the life of a people. But then, the times we live in seem to caution us that it is improper to use superlatives and hold the times of the Emergency as the worst time for the press in India. Gauri Lankesh, if she was editing the patrike then may not have brought out the paper in that age. She may have been put in jail and even tortured as was Snehlata Reddy and Michael Fernandes. But she would not have been shot dead right at her doorstep.

It is not as if Gauri is the only journalist to have been killed in the short life of this nation. Journalists have been ‘dealt with’ as and when they stepped on the toes of any one of the Mafiosi. Journalists being attacked by individual political leaders or their hired killers are also commonplace and all these have allowed the erosion of democratic values in our society. The media, meanwhile, has also shown many erring politicians their place. That Arun Shourie and Ashwani Sareen had taken on the political establishment in their own way is indeed evidence that we have been a democracy even after the Emergency and the poor record of many a newspaper establishment during those dark days.

The murder of Gauri Lankesh, however, is not just a part of this long story and in no way is a tale of another journalist being ‘dealt with’; nor is it something whose relevance is limited to that of a free press and the safety of a journalist. Gauri was not a journalist of the usual kind. Journalism for her was just a conviction and her patrike belonged to a league to which Kesri, edited by Bal Gangadhar Tilak and Young India edited by M.K.Gandhi. The patrike did not take advertisements and the entire cost of its production was taken from the subscribers. It was hence a matter of conviction to her as much as she was committed to the Idea of India that matured on November 26, 1949 in the form of a Republican Constitution.

Gauri was committed to the Constitutional scheme and had a lot of faith in the rights it guaranteed to the people. She was among those who felt strongly about the Right to Life in the fullest sense and hence used her patrike to speak up against intolerance of all kinds. She stood by those who dissented and stood up for the right of every human being to freedom of religion and against all kinds of bigotry. And journalism to her was not a profession but an article of faith and her own very existence was defined by the Idea of India that Mahatma Gandhi represented or Tilak articulated when he described Swaraj as his birthright and he shall have it.

It is hence that one needs to see Gauri as belonging to a rare breed of public intellectuals to whom democracy was more an ethical concern than another word to be used in the public discourse. She was killed in the same way as were Dabholkar, Kaluburgi and Pansare, all of them public intellectuals to whom the fight against obscurantism was integral to the fight for democracy and the individual’s freedom was supreme and non-negotiable.

The message is that it is time that the working journalists as a community take stock of the business model that the media has turned into and ponder as to how to preserve and further democracy within the profession and outside in the society. Gauri devised one of the means to ensure the press stood up to power. It is necessary for each one of us in the media to ponder over this.

The murder of Gauri Lankesh is a warning that it is time now to agree that the Emergency was not the worst of the times for democracy and for the media in India. We are in times that are darker and it’s time to wake up before it gets worst. We, as a nation, are now where Germany was in the mid-1930s and those who know history will realise what happened to Germany in 1945: The nation stood humiliated and devastated for having let Adolf Hitler rise to power.