India   All India  16 Sep 2017  TN getting stuck in vortex of protests and strikes
India, All India

TN getting stuck in vortex of protests and strikes

The fact is the state is stuck in a vortex of protests, strikes and disruptions. 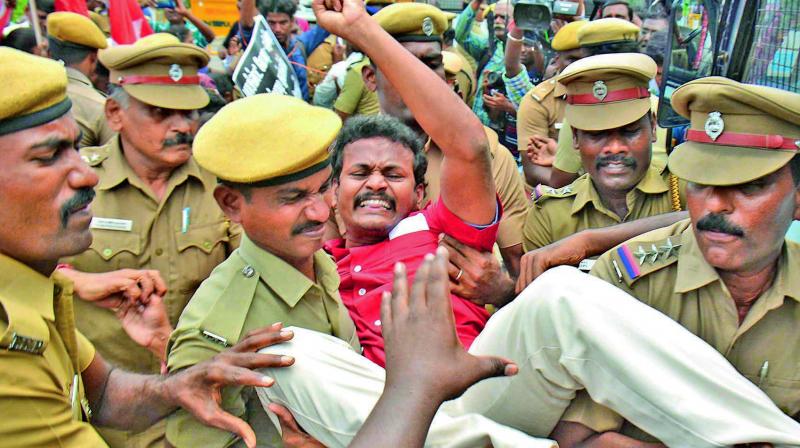 The court was clear in making a distinctionbetween the right to peaceful dissent and creation of violence in the name of protest.

There is not too much to be read into what the Supreme Court had to say about the protests in Tamil Nadu. It would have said much the same thing about any other state if it had been brought to its notice that normal life was being disrupted by frequent protests, road rokos and demonstrations. The fact is the state is stuck in a vortex of protests, strikes and disruptions. Neet is probably just another medium that is keeping the state’s gathering ‘agitationalism’ going. The defiant mood may have been triggered by the Jallikattu protests of 2016, but that had an emotional connect to the public through an ancient sport seen as symbolic of Tamil Nadu.

The court was clear in making a distinctionbetween the right to peaceful dissent and creation of violence in the name of protest. “We may clearly state here that a peaceful protest or criticism or dissent is different than creation of a law and order situation. Every citizen of this country has a fundamental right to peacefully protest and demonstrate, but not to cause a situation that results in violence and paralyses the law and order situation,” the Supreme Court said. It is becoming a part of TN contemporary history that the right to protest is being taken forward as a kind of fad, or a comfortable form of escapism.

When the anti-Hindi agitation intensified in the 60s, it was seen as a developing phenomenon in a State that used to pride itself on being a peaceful place. There were other agitations and demonstrations, particularly on the Sri Lankan Tamils issue, which again had an emotional link to the people and not just students. A state that was becoming known for its general apathy to national issues woke up with Neet, bestirred once again, but not so much by its youth as in the famous Marina protests on Jallikattu after the protests reached the capital from Madurai, which was the epicentre as the issue began snowballing into a Tamil versus New Delhi war.

The death of Anitha, the wage worker’s daughter who cracked the state board exam, became another flash point for unleashing the same beleaguered feeling of Tamils versus the Centre.

Once the Supreme Court had ruled that Neet shall be the sole basis for admission to MBBS and BDS courses, it seems futile that the state should simply keep upping the ante by egging the students on when they would be better off perusing their study material in an academic year that is mid-term for most save the medicos who too have begun their education on the way to becoming doctors and dentists. It’s so obvious that much of the resistance to Neet at this point in time is political as the issue stands settled for this academic season. Would not those agitating now be seizing the seats of their fellow students if they succeed in their aim of reversing the decision?

The point is students should be in the classrooms. In the intensely competitive world of today, they need every study hour they can get, besides more time to broaden their knowledge base without which they will be laggards when they leave the state’s cocooning Matriculation examinations, which are fossilised streams of study now. All syllabuses needs upgrading, from Class I to Engineering if today’s students are to be tomorrow’s innovators. The more students are allowed to think they need to be mollycoddled by easy exam marks, the more likely they are to feature in protests on the road rather than getting down to the grind. Tamil Nadu’s future lies in competing, not hiding or running away.