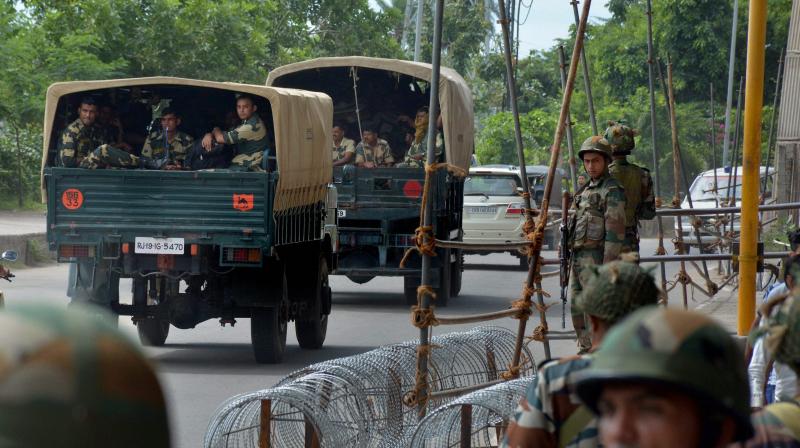 Army soldiers patrolling in Panchkula, Haryana on Monday. A special CBI court on Monday sentenced Dera Sacha Sauda chief Baba Gurmeet Ram Rahim Singh 10 years of imprisonment in each of the two cases of rapes against him. (Photo: PTI)

Chandigarh: In view of the Dera Sacha Sauda head Gurmeet Ram Rahim Singh’s hearing in two separate murder cases on Saturday in Panchkula, security has been beefed up around the city and other parts of the Haryana.

The cases related to the murder of Sirsa-based journalist Ram Chander Chhatrapati and former Dera manager Ranjit Singh, allegedly by functionaries and followers of the sect, will be held in the court of special CBI judge Jagdeep Singh. The same court on August 25 convicted Ram Rahim on two counts rape of his female disciples. According to Haryana director general of police B.S. Sandhu, adequate para military and Haryana police personnel are stationed around the court complex in Sector 1 here and other areas in Panchkula town.

There are no reports of the dera followers assembling in Panchkula ahead of the Saturday’s hearing, unlike the day when the rape judgement was pronounced when over one-lakh followers converged in the town. Ram Rahim has been sentenced to 20 years of rigorous imprisonment on the two counts of the rape of his female followers. He is also the main accused in the murder case of a dera member Ranjit Singh. It has been alleged that Ranjit was shot dead in 2002 at the behest of Ram Rahim.

Another victim, journalist Ram Chander Chhatrapati, was also allegedly killed at his behest in 2002.

A senior cop said Ram Rahim is unlikely to be physically present for the hearing as he is lodged at the Sunaria jail near Rohtak. The hearing would take place through video conferencing.

Haryana saw deadly violence by dera followers after Ram Rahim was convicted in the rape cases by the special CBI court on August 25, leaving 41 people dead and injuring over 250 people in Haryana.