They said that a bullet hit Bahadur on the left side of his abdomen and he succumbed to injuries on the way to hospital. 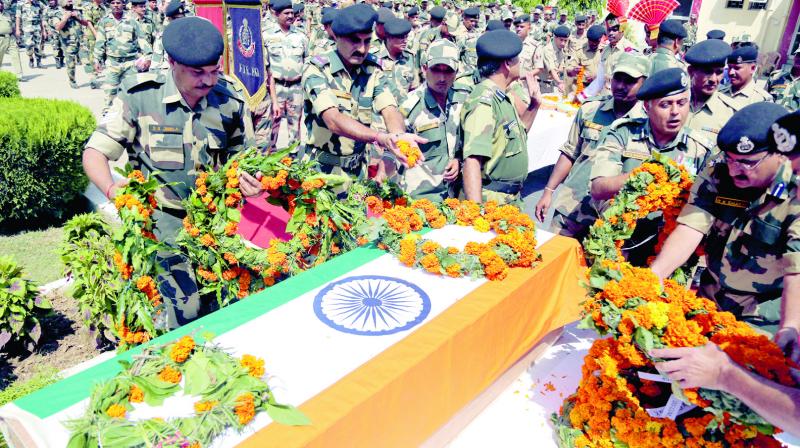 BSF officials pay tribute to constable Brijendra Bahadur, who was killed in firing from the Pakistan side, during a ceremony in Jammu. (Photo: AP)

Srinagar: A Border Security Force (BSF) jawan was killed as firing by Pakistani troops along the Line of Control (LoC) in violation of the November 2003 ceasefire agreement has spread to International Border (IB) in Jammu district of the state.

The officials said the Pakistan Rangers violated the ceasefire agreement for the third consecutive day between the intervening night of September 14 and 15 in Arnia sector of the IB, resulting into the death of BSF constable Bijender Bahadur. He was on duty at a forward post of the BSF in Arnia when the Pakistan Rangers fired mortars and also used small arms fire to target the Indian positions shortly after midnight.

They said that a bullet hit Bahadur on the left side of his abdomen and he succumbed to injuries on the way to hospital. The BSF troops retaliated by using same calibre weapon. “Our jawans retaliated strongly and befittingly using the same calibre weapons,” a BSF spokesperson  added. Intermittent exchanges continued till Friday morning, reports said.

The BSF said that Bahadur, 32, was a resident of Vidya Bhawan Naraypur village in Uttar Pradesh’s Balia district. He is survived by his wife Sushmita Singh. Earlier, the LoC in neighbouring Poonch and Rajaouri districts witnessed repeated ceasefire violations by the Pakistan troops during past couple of weeks. The Indian officials had said on Thursday that two Pakistani soldiers were killed in retaliatory action by the BSF earlier during the day. They said the action came after three Indian jawans were injured.
in “unprovoked” firing and shelling by Pakistani troops along the IB and the LoC in Jammu and Poonch districts on Wednesday.

However, Pakistan had denied the charge and accused the Indian troops of initiating firing but along the LoC and the IB called ‘Working Boundary’ by it. India’s Deputy High Commissioner, J. P. Singh, was summoned to Foreign Office in Islamabad by Pakistan’s Director General (South Asia and SAARC), Dr. Mohammad Faisal, over alleged “ceasefire violations” by Indian troops along the LoC which had resulted in the killing of two civilians. The firing, he was told, took place in Phulian sector on the Pakistani side of the de facto border and that also three persons including a woman were injured.

Islamabad accused the Indian troops of “deliberately targeting” civilians and termed it “deplorable and contrary to human dignity and international human rights and humanitarian laws.” It urged India to respect the 2003 ceasefire agreement and investigate various incidents that have taken along the LoC.

However, India has strongly denied Pakistani allegations and said that the incidents of ceasefire violations by Pakistani troops have increased sharply this year. The officials said that till August 1, there have been 285 such actions by the Pakistan army, while in 2016, the number was significantly less at 228 for the entire year.

On the other hand, Pakistan has claimed that there have more than 700 ceasefire violations by the Indian troops this year, which resulted in the killing of 32 civilians on their side of the LoC.