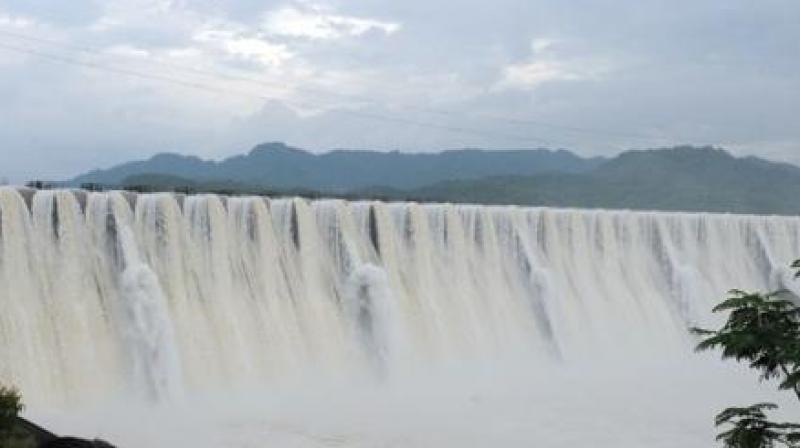 This will be Modi’s sixth visit in 2017 to his home state where Assembly elections are due by year-end. (Photo: AFP)

Ahmedabad: Prime Minister Narendra Modi will on Sunday dedicate to the nation the Sardar Sarovar Dam on river Narmada, described as Gujarat's lifeline by BJP leaders, at an event coinciding with his 67th birthday.

The foundation stone of the dam was laid on April 5, 1961 by the country's first prime minister Jawaharlal Nehru. However, it took 56 years to complete its construction.

Modi will arrive in Ahmedabad on Saturday night, and seek blessings of his mother Hiraba on Sunday morning.

His visit, which has added significance as the Assembly elections are due in Gujarat by year-end, is the second in less than a week after he hosted Japanese Prime Minister Shinzo Abe here and launched the Bullet train project.

"Tomorrow Sardar Sarovar Dam will be dedicated to the nation. This project will benefit lakhs of farmers and help fulfil people's aspirations," Modi tweeted today.

Earlier, Modi had stressed that the project will start a new chapter of prosperity for Gujarat.

Chief Minister Vijay Rupani had called the project as "Gujarat’s lifeline" noting that the agriculture income and production of farmers in the state more than doubled because of it.

The event will take place at Kevadia in Narmada district.

The delay in the completion of the dam was due to numerous reasons. Medha Patkar-led Narmada Bachao Andolan took the government to the Supreme Court over environmental and rehabilitation issues, and obtained a stay in 1996.

The court allowed resumption of work in October 2000.

The height of the dam was recently raised to 138.68 metres, which will allow maximum 'usable storage' of 4.73 million acre feet of water.

"The Congress committed the sin of obstructing the project at every step. Within 20 days of becoming prime minister, Modi gave final approval to raise the height of the dam," Gujarat BJP spokesperson Bharat Pandya said here.

After the inauguration at the dam site at Kevadia, Modi will go to Sadhu Bet, an island in the Narmada river where a 182-metre tall statue of Sardar Vallabhbhai Patel, called 'Statue of Unity', and a memorial complex dedicated to the country's first home minister are coming up.

Thereafter, the PM will attend the closing ceremony of 'Narmada Mahotsav', and address a gathering at Dabhoi.

He will also lay the foundation stone for National Tribal Freedom Fighters' Museum during the event.Modi will then visit Amreli in Saurashtra where he will attend a host of programmes and address a public gathering.

"Looking forward to addressing a gathering of cooperatives, Sahakar Samemelan in Amreli tomorrow," the PM tweeted.

Meanwhile, the Gujarat Congress has claimed that the project is not complete and canals of 43,000 km length were yet to be built despite the BJP ruling the state for 22 years.