Nirmala Sitharaman will also preside over a function for “Swachhta Hi Sewa” in Delhi Cantonment area. 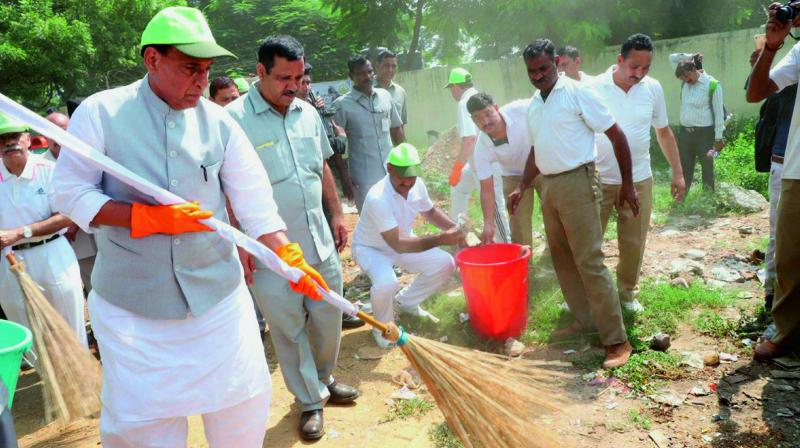 New Delhi: A key branch of India’s Military Intelligence, the Additional Directorate General of Public Information (ADGPI), is on the overdrive in the backdrop of the nation-wide and fortnight-long Swachchh Bharat campaign that was launched on Friday.

Paper documents, 32 old computers and laptops, CDs, about 850 odd video cassettes, books, pamphlets, etc totaling more than 3,000 kg have been carefully destroyed in order to clear up the “junk” at the ADGPI office in South Block which houses the sensitive defence ministry.

Interestingly, this is the first time since 1994 that such documents, infotech hardware and informational material that have long served their purpose are being done away with. It was quite an effort to segregate the material keeping an eye on the fact that important material was not lost, a top official told this newspaper.

With technology taking leaping strides and I-T hardware and software building up huge spaces to store important information in much smaller devices, the clean-up operation was the need of the hour, a top official told this newspaper. “And the ‘Swachhata’ campaign provided the fillip,” the official said. The nationwide sanitation campaign is geared to highlight Swachchh Bharat Mission, the Narendra Modi-led NDA government’s flagship cleanliness effort. Under the Directorate General of Military Intelligence, ADGPI deals with media relations. Evolving into a key directorate in the aftermath of the Kargil War, it is responsible for the perception management of the Indian Army.

On Sunday, which is also the birthday of PM Modi, defence minister Nirmala Sitharaman will also preside over a function for “Swachhta Hi Sewa” in Delhi Cantonment area.

The government will also observe ‘Seva Diwas’ (Day of Service) on September 17 which focuses on mass mobilisation for sanitation to contribute to Mahatma Gandhi’s dream of a clean India.

The defence ministry has come up with an action plan for overall cleanliness drive in and outside South Block and Sena Bhawan during the 18-day campaign. It includes arrangement of dustbins at prominent places for segregating biodegradable and non-biodegradable waste; discarding of old junks; cleaning of parking lots, corridors, staircases, and lifts in both the buildings.