The woman was arrested after Army reported her to the Delhi Police. She was released within hours after a judge granted her bail. 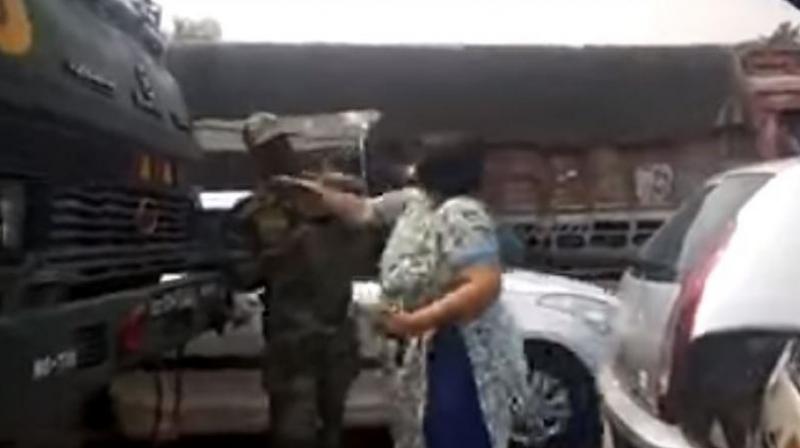 A woman was caught on camera slapping and abusing a soldier relentlessly, without facing any resistance at all. (Photo: Screengrab | YouTube)

New Delhi: A video showing a woman slapping and abusing a soldier relentlessly, without facing any resistance at all, has raised many eyebrows.

The woman was arrested on Friday after Army reported her to the Delhi Police. She was released within hours after a judge granted her bail.

The video captured by a passer-by shows the woman continuously slapping a soldier in a busy street of the national capital. Soon after another soldier can be seen coming to the rescue of his colleague after which the woman is seen promptly turning back to her vehicle to leave.

Additional DCP (south), Chinmoy Biswal said the woman, identified as Smriti Kalra, was produced in the court of Metropolitan Magistrate Lovleen, who granted her bail.

As per the FIR lodged on September 13, police said the subedar was heading towards Hazrat Nizamuddin station in a truck to drop off five colleagues. The truck was being driven by the constable. Near Rajokri flyover, a Tata Indica driven by Kalra overtook it. In his complaint, the subedar alleged that she was driving in a zig-zag manner and refused to give way. He also claimed that Kalra blocked their way when they tried to drive past her.

The driver stopped the truck and the subedar asked him to talk to Kalra. However, the complaint alleged that Kalra held the constable by the collar, slapped him and hurled abuses at him.

Police said Kalra then came to the truck and banged on its windows. She then hurled abuses at the subedar. He got out to speak to her but she slapped him a couple of times, the complaint alleged. As the woman was holding up traffic, the subedar’s colleagues got out. Kalra immediately walked towards her car and left.