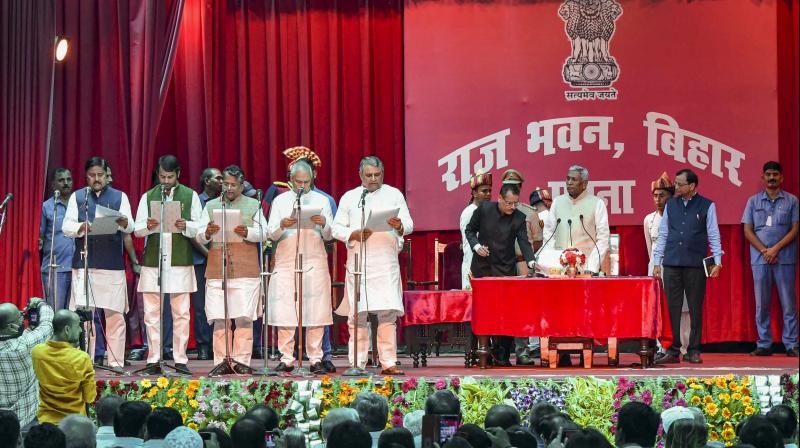 Patna: A week after taking the oath for the eighth time, Bihar chief minister Nitish Kumar expanded his Cabinet in a ceremony at the Raj Bhavan in Patna on Tuesday. A total of 31 ministers were inducted into the Cabinet. The RJD, the largest party in the grand alliance, was given 16 ministries, followed by Nitish Kumar’s JD(U), which kept 11 berths. The Congress managed to secure two posts and Jitan Ram Manjhi’s HAM got one berth.

Those who were sworn in included Lalu Prasad Yadav’s elder son Tej Pratap.

Shortly after the swearing-in, the portfolios were distributed. According to the list, chief minister Nitish Kumar kept with himself home, general administration, cabinet secretariat,  election and all departments not assigned to others.

Besides, the CM and deputy CM, JD(U) MLAs Vijay Kumar Chaudhary and Bijendra Yadav are the only two ministers who have been allotted multiple portfolios in the newly- formed grand alliance government.

While picking ministers, chief minister Nitish Kumar and his deputy Tejashwi Yadav has given preference to experience and also tried to maintain the caste balance in their Cabinet.

As per the list, the RJD has tried to go beyond their M-Y factor in picking leaders from their party. The party gave six  berths to Yadavs, three to Muslims and one each to other castes -- including the EBC, Vaishya, Kushwaha, Rajput, Bhumihar, Paswan and Dalit.

According to sources here, the Bihar Cabinet can have up to 36 ministers, including the CM. Some of the berths were kept vacant for future expansion.

Nitish Kumar had cut off his ties with NDA and formed a government with the RJD, Congress and other Opposition parties a week earlier. A day after announcing his tie-up with the Mahagathbandhan, or grand alliance, he took oath as chief minister on August 10. RJD leader Tejashwi Yadav took the oath as deputy chief minister.

The strength of the Bihar grand alliance rose to 164 recently after an Independent MLA, Sumit Kumar Singh, extended his support to Nitish Kumar. He was also inducted into the state Cabinet on Tuesday.

Later, the BJP, which has been upset with the new political alignment in the state, criticised the grand alliance government by calling it “a mixture of compromise and contradiction”.

BJP spokesman Nikhil Anand said that “around 60 per cent of members who were inducted into the state Cabinet have serious criminal cases pending against them. The government which talks about social justice has also completely ignored the extremely backward castes”.