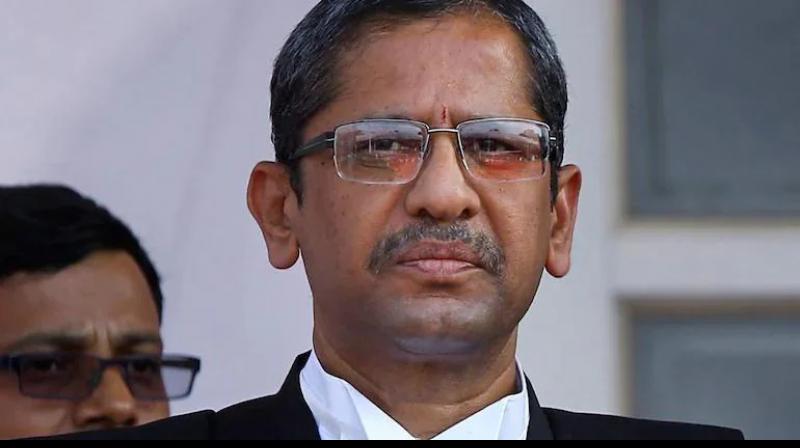 Chief Justice Ramana’s strictures on police methods and condemnation of Section 124A of the Indian Penal Code on sedition apply to all three nations, not just India, where the tragedy of the late Father Stan Swamy heaped shame and disgrace on the authorities. (Twitter)

India is not a police state. But a combination of sophisticated technology, systemic abuse, low-level brutality and political authoritarianism could push it into that decadent darkness unless the danger is recognised, and timely preventive steps are taken. What Justice Rohinton Fali Nariman, recently retired from the Supreme Court, refers to as the “legitimate expectation in the people of India and the litigating public to get a certain quality of justice” must not be disappointed.

Justice delayed is justice denied, especially in district and subordinate courts where 33.3 million cases were pending last year. This is also the level at which the police can be most oppressive. Reading Chief Justice N.V. Ramana’s tart comments about “the threat to human rights and bodily integrity [being] the highest in police stations” and “custodial torture and other police atrocities” recalled an occasion many years ago when my car broke down somewhere in the West Bengal countryside forcing me to walk to the nearest village for a mechanic. Seeking to shorten the distance by cutting through the fields, I asked a lad who was herding goats whether a cross-country trudge was safe. “Oh yes”, he replied, “the CRPF have gone!”

I had meant goondas and wild beasts that might be lurking in the fields. The greatest danger for that village boy, however, came from the modern incarnation of British India’s Crown Representative’s Police, the Viceroy’s private army in short, which was hugely expanded after 1949 to become Independent India’s super police as the Central Reserve Police Force. If the CRPF is seen as the enemy, one might as well ask with the Roman poet Juvenal: “Quis custodiet ipsos custodes” (Who will guard the guards themselves)?

India, Pakistan and Bangladesh are heirs to the same colonial legacy. Chief Justice Ramana’s strictures on police methods and condemnation of Section 124A of the Indian Penal Code on sedition apply to all three nations, not just India, where the tragedy of the late Father Stan Swamy heaped shame and disgrace on the authorities. When Sheikh Hasina Wajed’s Awami League government in Bangladesh jailed a prominent Opposition politician, anguished messages from his sons about their 62-year-old father being tortured prompted me to mention the matter to a senior Bangladeshi diplomat. He replied matter-of-factly that anyone who was arrested in the subcontinent should expect blows and punches.

The continued use of colonial methods exposes the fragility of any government that prides itself on its democratic credentials. As a British minister, Claire Ward, candidly admitted in 2009 while abolishing a nineteenth century provision to curtail dissent in Britain’s colonies: “The existence of these obsolete offences in this country had been used by other countries as justification for the retention of similar laws which have been actively used to suppress political dissent and restrict press freedom.”

Undoubtedly, law enforcement and justice dispensation are far more complex jobs in India than in tranquil Western democracies. As the Chief Justice pleads: “It is not easy to prepare for more than 100 cases every week, listen to novel arguments, do independent research, and author judgments, while also dealing with the various administrative duties of a judge, particularly of a senior judge…”

Some legal adjustments have been made. The 1959 Nanavati case led to the abolition of juries, whose ability to dispense impartial justice is hampered by traditional societal values. Nor is the legal maxim Falsus in uno, falsus in omnibus, meaning that a witness who tells lies about one matter is likely to tell lies about all matters, regarded as tenable because truth and falsehood are so closely entwined here. In his admirable little book, Strangers in India, Penderel Moon of the Indian Civil Service had argued that British law is so alien to most Indians that the innocent are often punished while the guilty go scot-free.

Chief Justice Ramana’s condemnation of police brutality recalls the public scepticism in 1972 when the authorities claimed that the 53-year-old Marxist-Leninist leader and theoretician, Charu Majumdar, had succumbed to a massive heart attack in his prison lockup 12 days after being arrested. Even more pertinent is the case of a former assistant commissioner of the Kolkata police who was sentenced to one year of imprisonment for torturing a woman (her lower body had been paralysed as a result) for 28 days to extract information about her brother, a Naxalite fugitive. After lodging her complaint against five policemen three years after the incident, the victim had to wait another 19 years for to obtain justice.

Asked whether it was true that a warrant was not needed to effect an arrest, as a police station head had claimed, Kolkata’s onetime legendary police commissioner Ranjit Gupta had explained that under the law, the police could arrest someone without a warrant only if the person was likely to flee. “This being India,” he added, “the exception becomes the rule.”

That well suited the authorities of the British Raj when the government’s purpose was to secure raw materials, manpower and markets with the minimum of trouble. The undoubted benefits of British rule were accidents of colonialism and the outcome of the individual conscience of thousands of well-meaning Britons rather than any imperial design. Sophisticated snooping devices, restrictions on using the social media, the appointment of only like-minded judges, and what Chief Justice Ramana calls “soft torture” are entirely unnecessary for a country that takes pride in its ancient civilisation and whose current government boasts of its nationalistic achievements.

When Tarzie Vittachi, the Sri Lankan journalist, had asked Jawaharlal Nehru, the creator of modern India, three years before he died to identify his greatest failure, Nehru had replied after a long reflection: “I failed to change this administration. It is still a colonial administration.” Vittachi felt that for Nehru, the new Indian Administrative Service was far too much like the old Indian Civil Service.

Prime Minister Narendra Modi must know that no self-respecting government can rely on the tools of an alien conqueror and still claim to rule by popular consent.