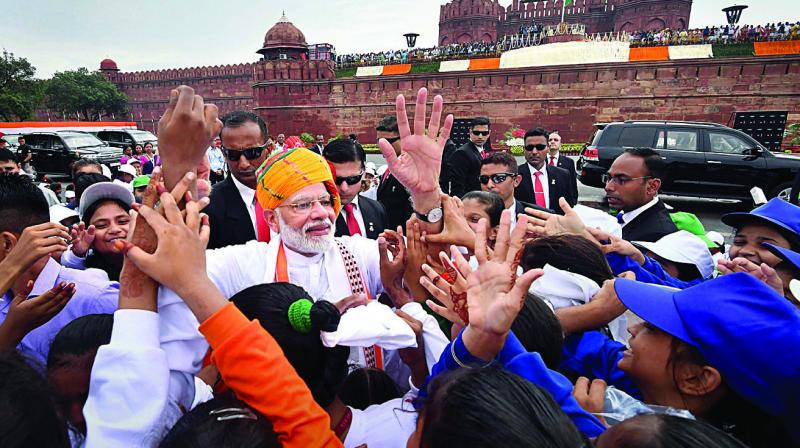 Prime Minister Narendra Modi interacts with schoolchildren after addressing the nation from the ramparts of the Red Fort on the occasion of the 73rd Independence Day in New Delhi on Thursday. (Photo: PTI)

New Delhi: Prime Minister Narendra Modi, announcing a key military reform in his Independence Day address from the ramparts of the Red Fort here on Thursday morning, said the post of Chief of Defence Staff would be created, who was likely to be above the chiefs of the Army, Navy and Air Force.

This landmark announcement comes 19 years after the idea was first proposed in the aftermath of the Kargil conflict of 1999.

The CDS will be the top military official and will be the Prime Minister’s one-point reference on defence matters. The CDS will bring greater integration and coordination among the Army, Navy and Air Force to effectively respond to all external threats.

It is learnt that the Chief of Army Staff, Gen. Bipin Rawat, could be the first Chief of Defence Staff. Mr Modi indicated that the three service chiefs might report to the CDS, saying that there would be “an effective leadership to guide the services”.

“We have decided that we will now have a Chief of Defence Staff and after the formation of this post all the three forces will get effective leadership at the top level,” the Prime Minister said in the Red Fort speech.

Mr Modi said the scope and nature of war was fast changing and “in the circumstances India too should not have a fragmented approach”. He said: “Our entire military power will have to work in unison and move forward. Things cannot move smoothly if anyone from the Navy, Army and Air Force is a step ahead from the other two forces, while the other two are lagging behind. All three should move simultaneously at the same pace,” said the Prime Minister.

He said there should be good coordination and “it should be in line with the changing war and security environment in the world”.

The creation of the Chief of Defence Staff, which is seen as the biggest military reform in decades, comes nearly two decades after the Kargil Review Committee had recommended it. Sources said that the government had already appointed acommittee to advise it on different aspects of the CDS matter, and could give its report by November.

Army Chief Gen. Bipin Rawat is seen here as the front-runner for the post of Chief of Defence Staff. Air Chief Marshal B.S. Dhanoa, the Chief of Air Staff, is currently the seniormost of the three service chiefs, and is chairman of the chiefs of staff committee. He will retire on September 30, which is likely before the post of CDS becomes operational. Gen. Rawat is due to retire on December 31.

It is still not clear whether the CDS will be a four-star or a five-star officer. At present, the seniormost of the three chiefs becomes chairman of the chiefs of staff committee. This post does not have any special powers.