BJP working president J.P. Nadda said the Modi government has a strong will power to resolve to nation’s problems and blessings of the people. 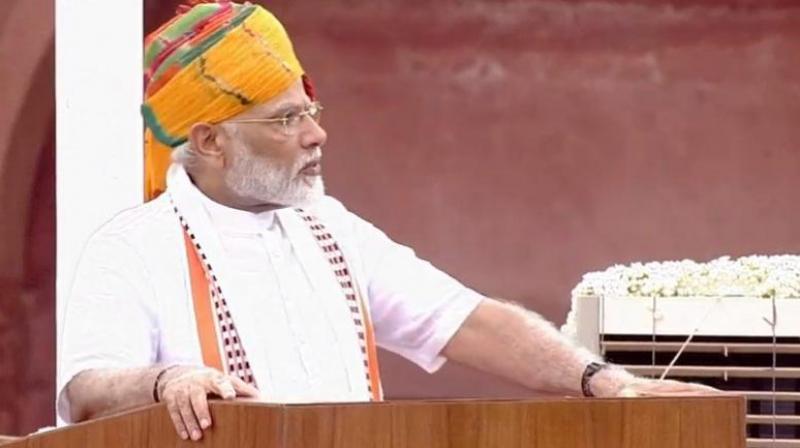 New Delhi: Hailing Prime Minister Narendra Modi’s Independence Day speech from the Red Fort as “unprecedented” and “inspiring,” the Bharatiya Janata Party (BJP) on Thursday said it reflected his “vision and resolve” to build the ‘New India’ of everyone’s dreams. The ruling party asserted that the Prime Minister’s speech infused “new energy, trust and pride” among the nation.

“A very inspiring speech by Prime Minister Narendra Modi on Independence Day from the ramparts of the Red Fort. PM Modi’s speech reflects his vision and resolve to build a #NewIndia of everyone’s dream,” tweeted BJP national president and Union home minister Amit Shah. He also hoisted the tricolour at his residence.

Despite suffering from viral fever, BJP veteran L.K. Advani continued to carry on with his dec-ades-long practice of hoisting the national fla-g at his residence on Ind-ependence Day. He however, had to skip the visit to the Red Fort when the Prime Minister unfurled the tricolour.

BJP working president J.P. Nadda said the Modi government has a strong will power to res-olve to nation’s problems and blessings of the people. Mr Nadda said the 73rd Indepen-dence Day was a “historic occasion” as the country had gotten independence from Article 370, instant triple talaq and redundant laws.

Union defence minister Rajnath Singh said the PM’s powerful speech “unveiled his vision for New India” and  highlighted the importance of Jal Sanchay Mission, tourism and world class infrastructure as it would pave the way for a 5 trillion USD economy.

Union minister of environment, forest and climate change and Information and Broadcasting, Prakash Javadekar tweeted: “In response to the call made by PM @narendramodi today, we will launch a massive campaign to make India single use plastic free. We will hold series of meetings with all the stakeholders to give thrust to the campaign to make India single use plastics free.” In his Independence Day speech, the Prime Minister urged people to shun single-use plastic and instead use jute or cloth bags to protect the environment.