India   All India  16 Aug 2018  This young man will be PM one day, Nehru had said of Vajpayee
India, All India

This young man will be PM one day, Nehru had said of Vajpayee

Vajpayee adhered to Nehru's idea of liberal pluralism and was also called the ‘Nehru of the Right’. 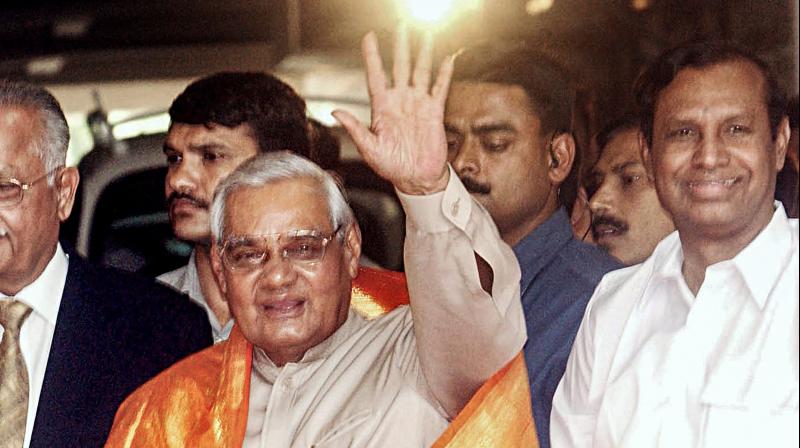 (A question remains who are Kauravas, who are Pandavas, everywhere

Shakuni has spread his net, (Yudhishtir) a man of righteous virtue remains addicted to gambling, Panchali (Draupadi) is being humiliated in every panchayat, the Mahabharat is being fought without Krishna, no matter who becomes the king, the poor will have to weep)

A poet, a politician and a gentleman. A visionary, a master orator. A nationalist and an internationalist. Atal Bihari Vajpayee, who always called himself a ‘swayamsevak’ and was apparently steeped in RSS ideology, managed to carve out a niche of his own. BJP's tallest leader always stood apart.

At a time when Jawaharlal Nehru has become Sangh Parivar's Voldemort (He-Who-Must-Not-Be-Named) and is engaged in erasing his legacy, one recalls a much famous story of Vajpayee's first day in South Block as external affairs minister.

As the anecdote goes, when in 1977 Vajpyee entered his new office, he looked around the walls. He saw a blank spot. He turned to one of his officials and asked, “This is where Panditji’s protrait used to be. I remember it from my earlier visits to this room. Where has it gone? I want it back.”

In 1957, mesmerised by Vajpayee's speech in Parliament, Jawaharlal Nehru had predicted: “This young man one day will become the country's Prime Minister.”

After nearly four decades, his prediction came true. Often called the “right man in the wrong party”, Vajpayee adhered to Nehru's idea of liberal pluralism. Vajpayee is also called the ‘Nehru of the Right’. He was the saffron leader responsible for bringing right wing politics to the mainstream.

Vajpayee became the first and only person since Jawaharlal Nehru to occupy the office of the Prime Minister of India through three successive Lok Sabhas and the first Prime Minister since Indira Gandhi to lead his party to victory in successive elections.

Vajpayee was born to Krishna Devi and Krishna Bihari Vajpayee on 25 December 1924 in Gwalior. His father was a poet and a schoolmaster.

After his schooling Vajpayee attended Gwalior’s Victoria College (now Laxmi Bai College) and graduated with distinction in Hindi, English and Sanskrit. He completed his post-graduation with an MA in Political Science from DAV College, Kanpur. He was awarded a first-class degree.

In the early 40s, Vajpayee joined Arya Kumar Sabha of Gwalior, the youth wing of the Arya Samaj. He also plunged into the freedom struggle and he and his brother Prem were arrested for 23 days during the Quit India Movement.

However, in 1939, Vajpayee, who had already joined the Rashtriya Swayamsevak Sangh (RSS) as a swayamsevak went on to become a “full-time worker” in 1947.

He left his law studies during the Partition riots. As recorded, RSS despatched Vajpayee as a vistarak (probationary pracharak) to Uttar Pradesh and he also began working for the newspapers of Deendayal Upadhyaya, Rashtradharma (a Hindi monthly), Panchjanya (a Hindi weekly) and the dailies Swadesh and Veer Arjun.

Vajpayee's rise in the Sangh was meteoric. In 1951, he was appointed as the national secretary of Jan Sangh (the previous avatar of BJP), in charge of the Northern region. Vajpayee became one of the closest aides of the founder of Jan Sangh, Shyama Prasad Mukherjee.

Among these leaders, Advani shared a rare friendship. Advani would often talk about their younger days and how Vajpayee would ride pillion on his scooter to have chaat at his favourite golgappawala in Connaught Place. Vajapyee was among the prominent Opposition leaders who was jailed during the Emergency imposed by the then Prime Minister Indira Gandhi.

Among one of the finest speeches Vajpayee delivered in his long political career was just after the Emergency in February 1977 at Ramlila Ground where several anti-Congress leaders came on a common platform to form the Janata Party. Among the top leaders who attened the historical event included Jagjivan Ram, Morarji Desai, Charan Singh and Chandra Shekhar.

But it was Vajpayee, who the crowd had turned up to listen to.

Journalist and author, Tavleen Singh in her book Durbar recollects: “It was well past 9.30 pm when Atalji’s turn finally came and as he rose to speak the huge crowd stood up and started to clap. Softly, hesitantly at first, then more excitedly, they shouted, ‘Indira Gandhi murdabad! Atal Bihari zindabad!’ He acknowledged the slogans with hands joined in a namaste and a faint smile. Then, raising both arms to silence the crowd and closing his eyes in the manner of a practised actor, he said, “Baad muddat ke mile hain deewane.” (It has been an age since we who they call mad have had

the courage to meet.) He paused. The crowd went wild.”

If Indira Gandhi was called the Iron Lady of India, Vajpayee was the perfect blend of ‘vikas and lauha purush’. While at one front he was the architect of the River-Linking Project and the Golden Quadrilateral, a highway network connecting many of the major industrial, agricultural and cultural centres of India, on the other he flexed his muscles with Pokhran II (a series of five nuclear bomb test explosions conducted by India at the Indian Army's Pokhran Test Range in May 1998) and a decisive victory against Pakistan's incursion at Kargil war in 1999.

As a messenger of peace, it was Vajpayee who extended the hand of friendship to India's next door neighbour with his bus to Pakistan. In its inaugural run on February 19, 1999, the bus carried Vajpayee to attend a summit in Lahore and was received by his Pakistani counterpart, Nawaz Sharif at Wagah.

Who can forget Vajpayee cracking the whip when a subtle challenge to his leadership was brewing within the organisation? In 2004, some leaders hinted of Vajpayee passing on the baton to Deputy Prime Minister, L K Advani. Vajpayee struck back in his own inimitable style by saying: “Na tired, na retired, chalo vijay ki aur Advaniji ke netritva mein”. The remark threw the party into a tizzy and panic stricken leaders rushed to say that: “Vajpayee would lead the party to the polls in 2004.”

The all powerful BJP ideologue, K N Govindachaya had to exit the party when he dared to call Vajpayee a ‘mukhauta’ (mask). During his conversation with some British officials, Govindacharya had reportedly said: “Vajpayee is not the internal strength of the BJP, merely a mask. A mask is useful only for theatre.” Govindacharya's proximity to Advani and the RSS could not save him from Vajpayee's wrath.

The master politician, who led the BJP to the national stage, had to bow out after he decided to hold early polls in 2004. Some say, Vajpayee was against holding early elections but gave into pressure as the party strategists with BJP's ‘Indian Shining’ campaign thought it was the right time to hold polls.

He apparently refused to be carried away by this feel-good wave and opposed to the ‘India Shining’ slogan.

Vajpayee, who received Bharat Ratna, the country's highest civilian honour at his home in 2015, was also a politican with many layers.

In his book The Untold Vajpayee: Politician and Paradox, author and journalist Ullekh N P writes, “From being in awe of Jawaharlal Nehru’s liberalism to being a flag-bearer of Hindutva to being an admirer of Indira Gandhi to being her trenchant critic to being a moderate to being a trend-setter in managing political coalitions, he often flummoxed his supporters and won over opponents.”

He adds: “You just couldn’t ignore him, and not only because of his good looks and poetic outbursts and oratorial skills. He was a consummate politician who knew the pulse of the people -- and more importantly, the pulse of the moment.

Today not only does Vajpayee remain BJP's tallest leader ever, but also a ruler who believed in ‘Rajdharma’.