‘I am going home now as an investigation has been completed and I have been asked to appear before the SIT on July 19,’ Baig said. 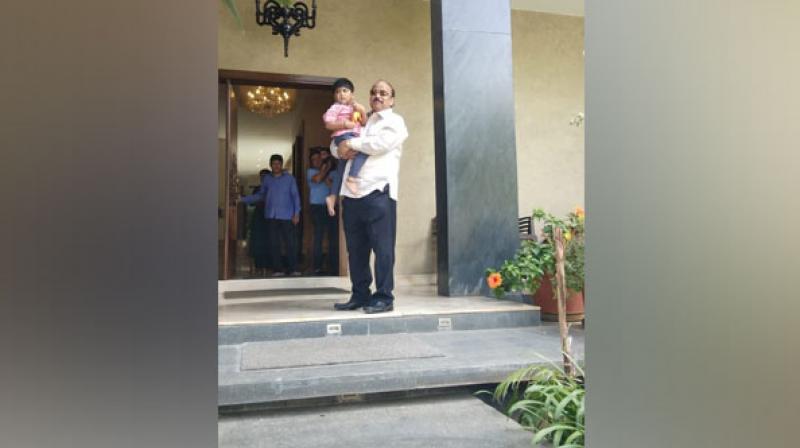 Earlier in the day, Baig's advocate filed a petition in Karnataka High Court questioning the detention of his client in connection with the multi-crore IMA fraud case. (Photo: ANI)

Bengaluru: Picked up from airport on Monday night, suspended rebel Congress MLA Roshan Baig on Tuesday was questioned by the Special Investigation Team (SIT) of Karnataka police in connection with the multi-crore IMA fraud case.

"They had called me for an enquiry. I am going home now as an investigation has been completed and I have been asked to appear before the SIT on July 19. I have also received a notice in this regard from the probe agency," he told media persons before reaching home.

On being asked about his late night detention by the SIT officials at the airport, he said: "I do not want to blame anyone. I was not visiting Haj in Mumbai, I wanted to go to Pune as some political controversy took place."

Meanwhile, SIT Chief Ravikante Gowda said that Baig was taken for interrogation on Monday from Bengaluru airport. "He was questioned and allowed to appear on July 19 for further interrogation," he said.

Earlier in the day, Baig's advocate filed a petition in Karnataka High Court questioning the detention of his client in connection with the multi-crore IMA fraud case.

Baig's advocate has asked how his client could be detained by the SIT when he had been asked to appear before it on July 19.

Last night, Chief Minister H D Kumaraswamy took to Twitter to say that the SIT formed by the state government to probe multi-crore IMA fraud case had detained Baig for questioning in the case.

"Today SIT probing the IMA case detained Roshan Baig for questioning at BIAL airport while he was trying to leave along with B S Yeddyurappa's PA Santosh on a chartered flight to Mumbai. I was told that on seeing SIT, Santosh ran away while team apprehended Mr Baig," Kumaraswamy had said.

Baig, who was suspended from Congress for anti-party activities, had said that he would quit the party and join BJP, a day after he resigned from his membership in the state Legislative Assembly.

Refuting the claims that Yeddyurappa's personal assistant Santosh was travelling with Baig, the BJP had said, "It is false that B S Yeddyurappa's P A Santhosh was travelling along with Mr Baig. The Chief Minister is peddling fake news and misleading the state. It was only Mr Baig who was travelling and there was no second passenger. We demand that a check be made of the boarding passes and CCTV footage to put out the facts."

An 11-member SIT headed by DIG B R Ravikanthe Gowda was formed by the Karnataka government to probe the alleged fraud by the firm.

Mohammad Mansoor Khan, promoter of IMA Jewels and prime accused in Ponzi scheme case, is under investigation for duping 40,000 investors in the state. He had claimed that he paid Rs 400 crore to Baig which he was not returning.