Have to eat rats to survive, claim locals in flood-affected Bihar village

However, Block Development Officer of Kadwa constituency Rakesh Kumar Gupta said officials are unaware of the conditions claimed by locals. 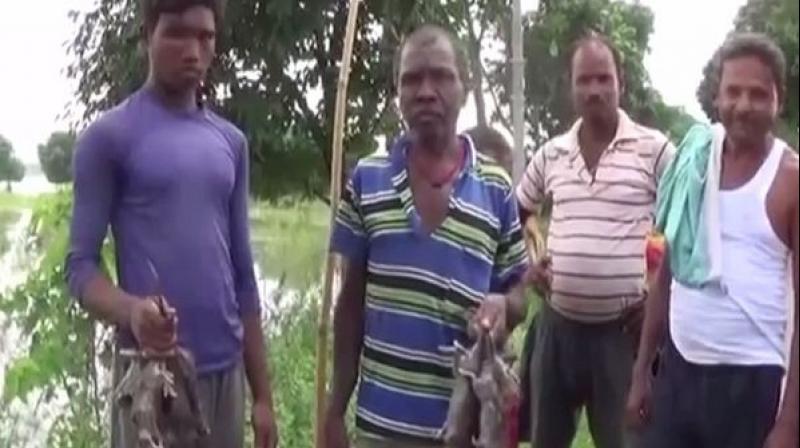 Talla Murmur, a local, said, ‘We are dependent on rats only to fill our stomachs. All my family members eat rats as they are easy to find in the floods.’ (Photo: ANI)

Katihar: Locals in Dangi Tola village of Katihar district in Bihar claimed they have no option but to eat rats as floods have wreaked havoc and destroyed houses in the region.

Around 300 families have been affected by floods in the area.

Speaking to ANI, Talla Murmur, a local, said, "We have to eat rats as our house has been destroyed by the flood. There are no arrangements for us. The government has given no facility to us. We are dependent on rats only to fill our stomachs. All my family members eat rats as they are easy to find in the floods."

"I have come here to catch a mouse with my grandfather as we don't have anything else to eat," said Murmur's grandson Vijendra.

However, Block Development Officer of Kadwa constituency Rakesh Kumar Gupta said officials are unaware of the conditions claimed by the locals.

"We have no information regarding the condition of the villagers in the flood-affected areas. Even if they are eating rats, maybe it is likely that the tribal people might be eating it," he said.

Bihar is witnessing floods as the water levels of several rivers have been rising following heavy rainfall in the past few days.

Many villages of Bihar's Araria, Darbhanga and Madhubani districts are flooded due to the heavy downpour.