A team of National Disaster Response Force (NDRF) has rushed to the building collapse site in Dongri. 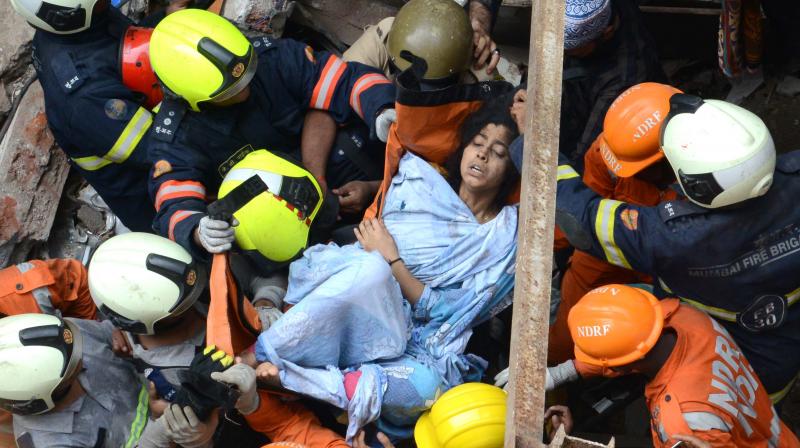 A lady being rescued out of the four-storey building which collapsed in Mumbai’s Dongri area on Tuesday. (Photo: Rajesh Jadhav/ File).

Mumbai: At least ten people have died and eight injured after a building collapsed in a congested Mumbai locality on Tuesday morning, trapping several other families in the debris.

Rescue operation was underway with locals also pitching in with the National Disaster Response Force.

According to preliminary information, the ground-plus-four-storey 'Kesarbai' building, located on Tandel Street in Dongri, crashed around 11.40 am.

The Brihanmumbai Municipal Corporation (BMC) had already issued a warning to the Maharashtra Housing and Area Development Authority (MHADA) about the wretched condition of the building, officials said.

In a letter submitted to MHADA Executive Engineer dated August 7, 2017, the civic body had mentioned the building was classified as 'C1' and should be evacuated for demolition at the earliest. 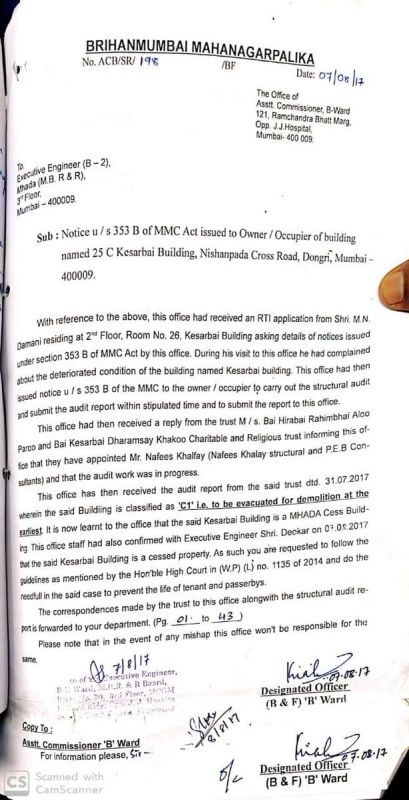 "As per initial information I have received, around fifteen families have been trapped in the debris of the building collapse. The building is almost 100 years old, its residents had approached MHADA for redevelopment of the building. We will launch an investigation to find out whether it was carried out or not," Fadnavis told media persons.

The chief minister said the entire focus was currently on rescuing people who were trapped. He also said compensation for victims will be announced only after the cause behind the collapse was established.

Collapse of a building in Mumbai’s Dongri is anguishing. My condolences to the families of those who lost their lives. I hope the injured recover soon. Maharashtra Government, NDRF and local authorities are working on rescue operations & assisting those in need: PM @narendramodi

The police have requested citizens to stay away from the site of the building collapse to facilitate effective rescue operations by authorities.

According to sources, the 11 Ismail Habib building situated in front of the 'Kesarbai' building, is also being evacuated as it was seen shaking.

Security forces along with teams from the fire brigade rushed to the site as soon as news broke. A team of the National Disaster Response Force (NDRF) also reached to help in rescue work.