The meeting with the Prime Minister was for presenting Mr Kapoor’s co-authored bestselling book The Peacock Feather. 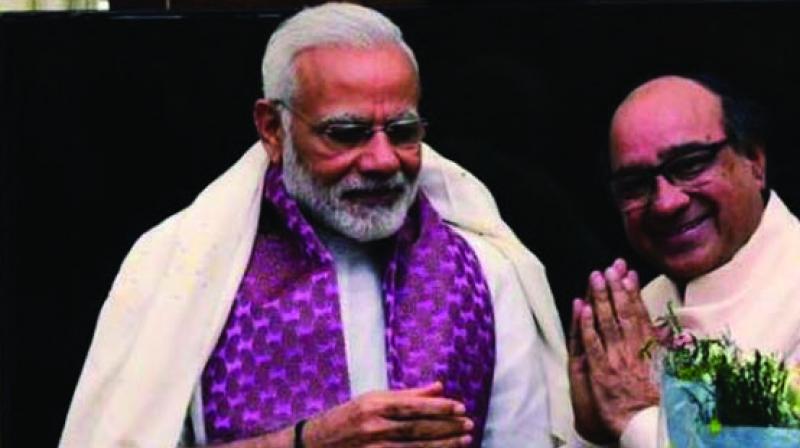 New Delhi: Prime Minister Narendra Modi has expressed a desire that Bollywood should come forward with more patriotic songs — a wish made ahead of his Independence Day address from the ramparts of Red Fort on August 15.

In a recent interaction with a well-known Delhi-based advocate, Sunil Kapoor (61) — also a Bollywood actor, song writer and singer — who is co-starring with actor Dharmendra in upcoming film Tiger Trail, the Prime Minister rued that there is a near drought of patriotic songs that served as a strong binding force for Indians in the earlier decades.

Mr Kapoor, who met Mr Modi in his Parliament House office, along with music director Anandji (of Kalyanji Anandji fame) said, “The Prime Minister suggested that the film industry should do more to strengthen patriotic feeling of people.”

A busy income tax and customs and excise lawyer, Mr Kapoor has started working on Mr Modi’s suggestion and even penned two songs — Jannat-e-Kashmir and Shahidan-e-Hindustan — and more are in the pipeline.

The meeting with the Prime Minister was for presenting Mr Kapoor’s co-authored bestselling book The Peacock Feather. He wrote the book along with his twin chartered accountant brother Sudhir.

Three stories from this book have been picked by Bollywood producers, including Joy Mukherjee productions, to adapt them into feature films. Rupa Publications is also coming out with Mr Kapoor’s another book Punam Ka Chaand which is a collection of 51 poems.

“Film Tiger Trail is aimed to create awareness about the fast dwindling tiger population. The poaching mafia kills them and other endangered species for a few lakh of rupees,” said Mr Kapoor, a product of prestigious Shri Ram College of Commerce.

Tiger Trail is based on a real story of notorious poacher Sansar Chand who had killed hundreds of tigers and other endangered species to sell their skin abroad. Mr Kapoor in this film acts as a police officer Harshvardhan who tracks and kills the poachers.

He said during his meeting with the Prime Minister he told him about his late father Shanker Kapoor, who hailed from Lahore, and made films in Mumbai in pre and post-Independence era with actor Pran and Nanabhai Bhatt, father of film director Mahesh Bhatt. Punam Ka Chand in 1967 was a big hit film of his father who also co-owned cinema halls in many Maharashtra cities.

An alumus of Modern School Barkhamba Road, Mr Kapoor recalled how he was inspired by great actors like Raj Babbar, Ravi Baswani, Kiran Kumar and Om Shiv Puri who came to their school to direct students’ plays in the 1970s. The actors were then enrolled as students in the National School of Drama close to his school in central Delhi.