PM Modi in a veiled attack on CM Mamata Banerjee said the 'syndicate' is playing vote bank politics to remain in power. 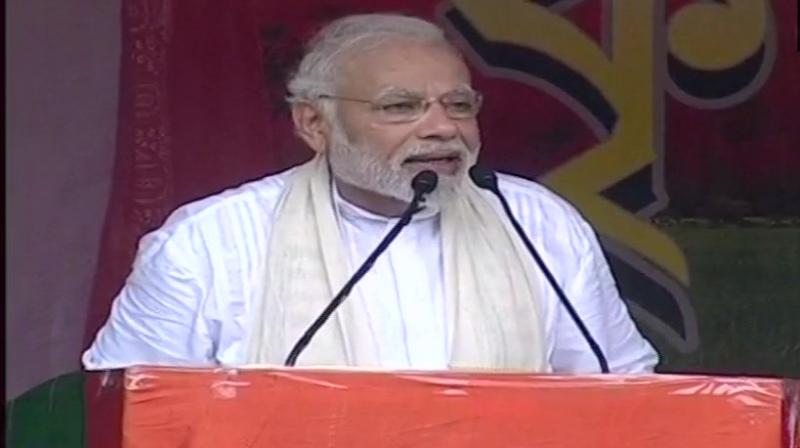 "The real face of 'Ma Mati Manush' is for everyone to see. There is 'murder your opponents' syndicate operating here. Nothing can happen in West Bengal without the permission of this syndicate. Even doing 'Puja' has become difficult here. This is the land of Vande Mataram and the national anthem. But the syndicate raj is using this great land for their vote bank," Prime Minister Narendra Modi said at the Kisan Kalyan rally.

The Prime Minister also took a jibe at the chief minister for putting her banner around the city just before his visit.

"I am thankful to Mamata didi for putting up so many flags to welcome me here. She herself is standing with joined hands in the hoardings to welcome me," Prime Minister Narendra Modi said.

Further underlining the initiative taken in favour of the farmers by the central government, he attacked the previous United Progressive Alliance (UPA) government for turning a deaf ear to farmers' plight.

He said the previous government discussed the issue of Minimum Support Price (MSP) for a long time but nothing was done in that regard.

"We clearly know the condition of Bengal right now. No benefits to farmers, no opportunities for youths. I hope West Bengal government will take required steps to create infrastructure for farmers, we want our farmers to use the latest technology," he said.

The Prime Minister's rally at Midnapore comes just about a fortnight after Bharatiya Janata Party (BJP) national president Amit Shah had a public meeting in Purulia district on June 29.