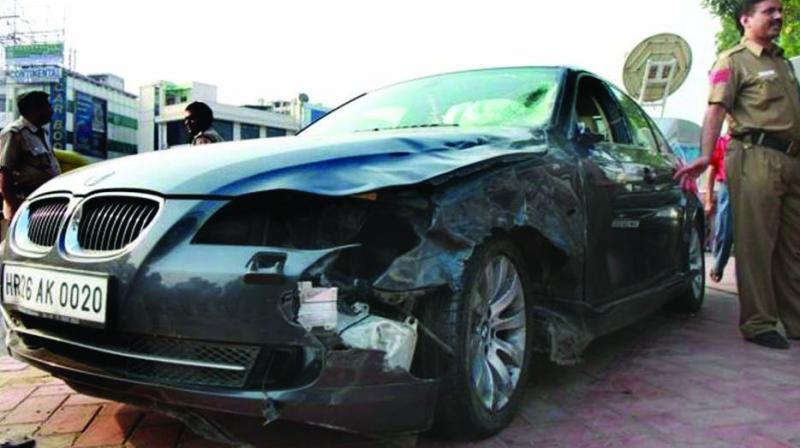 The BMW whose driver Utsav Bhasin crushed a motorist at Moolchand Flyover in 2008. (Photo: File)

New Delhi: A Delhi judge, while sentencing the son of a Haryana-based industrialist on Saturday to two years' imprisonment for mowing down a motorcyclist in 2008, observed how in India killers of cows get stringent punishment than negligent drivers who cause death.

“The sentence for killing cow is five, seven or 14 years in different states, but the sentence for causing the death of a human being through rash or negligent driving is only two years,” Hindustan Times reported additional sessions judge Sanjeev Kumar saying.

For death by negligence, rash driving and voluntarily causing hurt on provocation, the court held 30-year-old Bhasin guilty. It also announced an ex-gratia of Rs 10 lakh for the family of the deceased and Rs 2 lakh for the injured.

On the night of September 11, 2008, Bhasin, a BBA student at the time, ran over Anuj Chauhan and his friend Mrigank Srivastava, at the Moolchand area of South Delhi. He was arrested at ISBT Kashmere Gate, while he was trying to escape to Chandigarh.

While Anuj died in the hospital, Srivastava survived the accident.

The court had passed the verdict in May, but the quantum of punishment was pronounced on Saturday. A statutory bail was also granted, allowing Bhasin to file an appeal in the high court. The bail was set at Rs 50,000.

Bhasin was earlier acquitted of culpable homicide that awards a jail term of up to 10 years.

To enhance punishment under Section 304-A, the court asked for one copy of the judgement to be sent to Prime Minister Narendra Modi.

The court also noted that in the year 2015 alone, 4.64 lakh road accidents were reported in India.