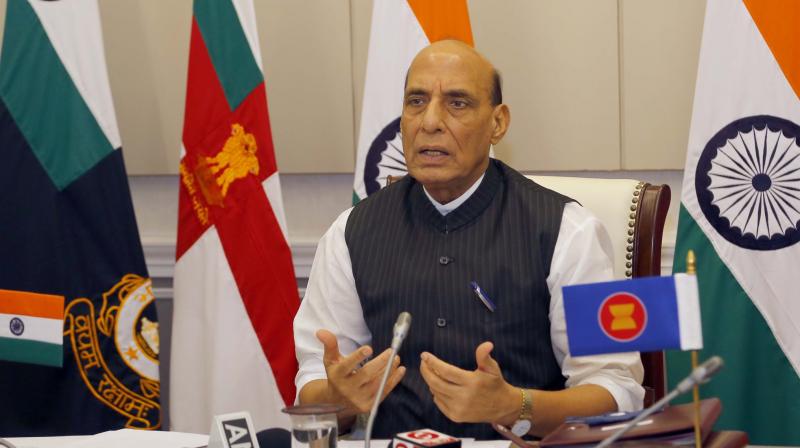 New Delhi: Terrorism and radicalisation are the gravest threats to peace and security in the world and a collective approach is required to combat the challenges, Defence Minister Rajnath Singh said on Wednesday.

In a virtual address at the ASEAN Defence Ministers' Meeting-Plus (ADMM-Plus), Singh called for strong action against those encouraging, supporting and financing terrorism and provide shelter to terrorists, seen as a veiled reference to Pakistan.

"Terrorism and radicalisation are the gravest threats to peace and security that the world is facing today," he said.

"India shares global concerns about terrorism and believes that, in an era when networking amongst terrorists is reaching alarming proportions, only through collective cooperation can the terror organisations and their networks be fully disrupted, the perpetrators identified and held accountable," hes said.

Talking about the Indo-Pacific, Singh called for ensuring a free, open and inclusive order in the region based on respect for sovereignty and territorial integrity of nations, peaceful resolution of disputes through dialogue and adherence to international rules and laws.

"India has strengthened its cooperative engagements in the Indo-Pacific based on converging visions and values for promotion of peace, stability, and prosperity in the region," he said.

"Premised upon the centrality of ASEAN, India supports utilisation of ASEAN-led mechanisms as important platforms for implementation of our shared vision for the Indo-Pacific," the defence minister added.

The inaugural ADMM-Plus was convened in Hanoi in 2010. The defence ministers then had agreed on five areas of practical cooperation to pursue under the new mechanism, including maritime security, counter-terrorism, humanitarian assistance and peacekeeping operations.